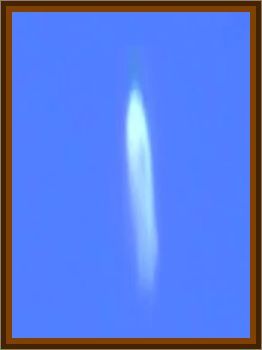 On Saturday, March 31, 2012, my wife and I also saw two different objects in the corner of the first floor of our house. At approximately 7:00 a.m. that day, our dog barked and she went to bring him outside.

When she went downstairs, she saw a glowing orb with a dome top and flat bottom. It was approximately 2' in width and 1½' in height. The object had two vertical lights inside which blinked green pulsating light. Facing the object, on our left side, bottom part, the object emitted bursts of very bright white light, some long and some short.

The object was located near a corner wall and appeared to be floating about 5' off the ground. My wife started to pray and started to telepathically talk with the object. My wife thought it was some kind of heavenly angel.

The object seemed to respond by emitting the white bursts and more blinking of the green lights. She was grabbing our dog at the time, and our dog had just had a stroke and was walking in a paralyzed fashion, limping to one side real bad and falling down as she walked. My wife asked if her dog can be cured.

The lights then began to blink a lot. After 15 minutes of observing and communicating with this object, she started to yell for me to come downstairs. I ignored her cause it was Saturday morning and I did not sleep well the night before and wanted to sleep. After 5 minutes of her yelling she came up and finally told me what she had seen. I first went to the bathroom and then downstairs.

I was very skeptical. When I got downstairs, we did not see the orb but a small cylinder shaped object which I am calling a Plasma Cylinder. The object did not appear to have edges but seemed like a fluid object with constant movement inside and on the edges of the object. Inside were multi colored lights similar to plasma. Each color was not unique and separate like a rainbow but more meshed like colored water and the water colors are constantly mixing. It seemed to be full of energy with colors floating stationary in the air.

The plasma object appeared to be about 1' in length and 6" in height. It was about 5' off the ground near the same corner wall that the orb was previously seen. The object then went directly through our wall to go outside. I only saw the Plasma Cylinder object for about 2 minutes before it disappeared through our wall.

Also note that we were going to put our dog to sleep in a few days before this incident, she could barely move and was walking sideways and constantly falling down. After the orb left, our dog did not appear to have any symptoms of the stroke, she was walking perfectly fine. She is still sick but she now walks fine. We were freaked out by this. Many of our friends saw the difference in her walk and we told them what had happened.

Saturday, May 6, from approximately 9:00 to 9:20 p.m., I and about 6 other witnesses saw approximately 8 to 10 orange orbs in Apopka, FL. The witnesses were myself, my wife's brother, my wife's father, 2 other adults, and a teenager.

We were attending the high school graduating ceremony of my wife's nephew who was graduating from Forest Lake Academy in Apopka, FL. The lengthy graduation ceremony was almost finishing and I wanted to get some air and stepped outside of the auditorium. We were located on a small hill about 300' north of state road 436 just west of state road 434. Thus, the orbs were very close, about 300' away, and the visibility was excellent.

All of the witnesses began to see bright yellow orbs rising from approximately the interchange of road 436 and 434 from about tree level. We could not see them coming from the ground but appeared to pop out at the tree level. They appeared to travel in a westerly direction along road 436 just south of it. The orbs appeared about every 1 to 2 minutes. Most were uniform in direction and most went west and upwards slowly, I would guess at 10 to 20 mph. Some began to float straight up and others moved faster, maybe 30-40 mph, than others.

The orbs then became distant and disappeared. This lasted from approximately 9:00 p.m. to about 9:20 p.m.

About 10 minutes later, two black helicopters came zooming in at a fast rate. They stopped on top of route 436 just south of Bear Lake Road, about ½ mile from where we were. They stayed there about 10 to 15 minutes and then left. The orbs had disappeared when they arrived.

Difficult to describe but they appeared to be the size of a small Volkswagen in the air. They were round in shape, bright orange color. Light was self contained in object and not emitted outwards. I thought they might have been Chinese lanterns but I have never seen a Chinese lantern before. But now after all of our recent sightings, I am having a second opinion.

We live in the Killian area of Miami and our best estimate is that the craft was near or above the Miami Zoo.

Our dog is very sick and throwing up and she went to open the door in front of our house so the dog can go to the bathroom. When she looked up, in a south westerly direction, she saw the craft at approximately a 45° angle. It was shaped like a cylinder but with pointed edges on both sides which appeared triangular shaped on each end. The right and left sides, inside the triangle portion of the edges, had two large bands of extremely bright multi colored lights on each side. The middle part of the craft appeared very light whitish or grey colored. The craft made an extremely loud noise, much more powerful than if an airplane was standing directly above us. The object remained stationary for about 5 minutes and then it disappeared. My wife said that she saw many stars in the sky that night and thus she had excellent visibility.

Previous to these events, my wife and I have never seen UFOS or other similar objects in our life. She is not bothered by this because she is very religious thinks that they were a messenger from God. I, on the other hand, have been freaked out. I started doing research on the subject, have joined MUFON, ordered about 30 UFO books, listen daily to Coast to Coast, etc, etc. I never even knew that these radio programs or UFO organizations existed. I am now consumed by the subject. I need to find some answers and some closure because my wife says that I became obsessed with this issue.

Finally, I am an attorney with the IRS in Miami, FL and my wife was trained as a physical therapist and is a stay at home mom. We live in a very nice upper middle class neighborhood in the Killian area of Miami, Florida. We have lead normal dull lives until recently.