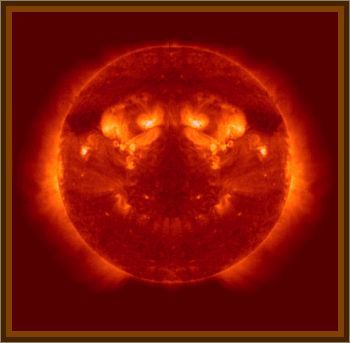 On 5th September 1980 Mrs. Pluta, who was pregnant, began to experience labor pains and the ambulance was called. She and I plus the driver & stretcher bearer were travelling along deserted country roads between Sztumem-Zalawach & Gdansk when we encountered, quite suddenly, at 3:15 a.m., a huge crimson globe that came down out of the sky and paced the ambulance for about 45 minutes.

As we were a team of professional medical workers, our first concern was for the safety of the mother & baby, and we considered the UFO a distracting threat.

For this reason we did not get very emotional at the time. However, when we came to a level crossing, the two attendants in their hut were simply shaking with fear at the sight. We had to halt because the road was blocked by the huge crimson ball.

To be more specific, this is what I believe we saw:

At first, all of us in the ambulance saw the globe as a big red ball in the sky, some distance away. It looked larger than the full moon and was dark crimson in color. It immediately descended to tree top height and hovered about 1500' from the ambulance. One second it hung in the sky at about cloud level, the next it was seen hovering between two trees either side of the road in the middle distance.

All of us sensed the globe's ominous approach, as it cruised towards us at a very low height, following the road. I was always aware that it was never exactly in the sky, but probably was not very high above the ground at any time.

As our ambulance approached the level crossing, so did the globe, and we each stopped there.

The globe was less than 3' above the surface of the road. I got out to speak to the crossing attendants.

Can you see what I see?

We've been observing it for some time.

I went back to the ambulance and told the others:

They cannot help us at all, they're trembling with fear.

At that point Mrs. Pluta's labor contractions became more frequent, and we felt it was urgent to get to the hospital immediately. Since our path was blocked, I decided to call the police. I reported that there was an obstacle in the way, and asked them to come immediately.

What kind of obstacle? they asked.

A UFO, I replied.

It was now 4:10 a.m. and all we could do was stay there and stare at the UFO. We had plenty of time to observe it in detail.

Its surface displayed curved bands and stripes, with a multitude of black lines traversing up and down in irregular patterns. These clear cut markings reminded me of veins inside the human body.

The ambulance driver said they looked to him like a huge net.

As we watched, parts of the surface changed color. There appeared to be orange/yellow patches on the deep crimson background.

Then, the globe dropped to only about 10" above the road, constantly changing colors, pulsating, but always with dull, muted tones.

Suddenly, it gave off a strong white light that was so bright it reflected on the surface of the road.

Out of sheer exasperation, our driver flashed his headlights at it, twice.

Immediately, inexplicably, it simply vanished. It was 4:15 a.m..

At 6:10 a.m. Mrs. Pluta gave birth to a daughter in hospital. A careful examination of the whole area in daylight revealed nothing.