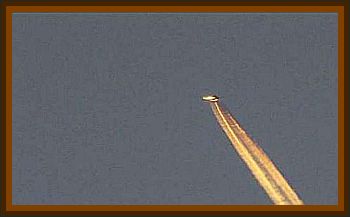 FBI agents were sent to the home of Insurance adjuster R. Switzer, who saw a metallic highly polished chromium surface object 4' to 6' wide 10" to 14" thick, rounded slightly on top larger in the front, leaving a white trail, at 500' to 1,000' altitude traveling at high speed.

Switzer told the agents he had been driving in the foothills of the Sierra Nevadas, along Cedar Ravine Road that day with his wife and kids, when a smoke trail appeared. At the head of the smoke was an object about 5' long and 14" wide, by his estimate, and of a metallic appearance that flashed in the sun. While in view the mystery cylinder was suddenly engulfed in a puff of dark grey smoke about 10' in diameter.

He said he had turned to say something to his wife but it was obvious that she had seen the whole thing for her mouth hung open and she was waving a finger at the lingering smoke cloud. No particles were detected falling out of the vapor.

Mr. Switzer guessed the thing had exploded fairly low and about 800 yards from the road. An air search was conducted but nothing out of the ordinary could be detected in the area. No more was attempted since the terrain was too broken for an exacting ground inspection.