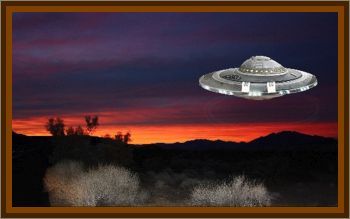 In the summer of 1977 in West Pittsburg, in the Contra Costa County area of California, three teenage boys would claim to witness a flying saucer land.

Their account garnered enough interest to eventually earn itself a place in the April 2, 1978 edition of the Oakland Tribune. And their story wasn’t told with a mocking tone, with all three of the boys still suffering nightmares over the incident.

It was the night of May 20, 1977, just before 11:00 p.m., when three boys, all were about 14 years old at the time, were outside in a grassy field just north of Willow Pass Road near Mallard Slough Road. They were near an area between the railroad tracks and the marsh, trying to devise a way to get to a local hang out called The Pump House, when they had their infamous Close Encounter of the Third Kind, or CE3.

Like many things, UFO sightings can be broken into several broad categories. Encounters of the first kind denote the seeing of a ball of light or some sort of object within 500'. The second kind implies physical traces have been left behind. But the third kind ties a being of some sort to the sighting.

According to the boys, they initially saw bright red lights with a blue light flitting like a firefly in between them. The lights remained at exactly the same distance from each other suggesting they were all connected to one structure. They were observing the odd lights, transfixed, as the craft darted some three miles away from their location in around five seconds, before returning.

Fascinated, the boys continued to observe as the craft landed in a nearby field.

Their descriptions of the encounter varied, which is not that uncommon in UFO sightings, but they all seemed to remember the ship having a row of square lights. The lights were reported as being like windows, with a larger window set in the line. None of the boys described it as a typical flying saucer.

In fact, one of the boys, Lennie Young, said the ship was round but flat, while another witness, George Ferrera, compared the ship more to a flying building. Yet another witness, Patrick Morrison, recalled the lights blinking on and off and reflecting from the sides of the object.

Just after the landing, the boys saw, emerging from darkness between themselves and the UFO, three creatures some 50' to 150' away. They said the beings were barely visible, lit by the light from two street lamps and a nearby liquor store.

According to Lennie Young:

They were like smoke. They were black. They had no faces. I don’t know if they had arms or heads. It was like they had no clothes on. They were walking towards us. They were about 5'6" to 6' tall.

I’ve stayed out all night in that field several times and I know what people look like walking in the dark. They were not people. They were something else.

They were weird looking, walking slow. They looked like they were wearing long skirts over their heads. They were black. They walked as if they were linked together.

Ferrera remembered them as gray objects, with a kind of human shape, but no eyes. They walked like robots.

As the three beings approached, the boys fled in absolute terror, heading back in the direction of Morrison’s house. As they ran, all three boys looked back and could see the figures emitting some sort of steam or gas as they pursued the boys. The boys claimed the beings were following close until the boys eventually lost them in the darkness.

Police and investigators who interviewed the boys after the incident said all three told the same story in vivid detail during separate interviews. The investigators also said the three boys were genuinely and deeply frightened by whatever they experienced that night. The boys even passed polygraph tests.

I found that the three boys had a consistent story with a level of detail present that does not appear to have been manufactured. If they had made up the story, they would have had to remember it very well. Their fright was very real.

Ferrera’s mother recalled that after the incident occurred, her son had nightmares and refused to go back to West Pittsburg.

His friends had a hard time convincing him to go see the movie Close Encounters of the Third Kind, Mrs. Wilder said.

Now what’s interesting about this story is that it is one of only three credible CE3s from that year that was logged at The Center for UFO Studies as a credible sighting. CE3s are extremely rare, and this one happened right in our community!

None of the teenagers experienced missing time and there were no signs of abduction. Hence, hypnotic regression would be of no use and would reveal nothing further. Also, there were no physical signs of a landing at the site the boys witnessed the craft. And, due to the already secluded location, there were no other witnesses to offer another point of view and to add to the timeline of events.