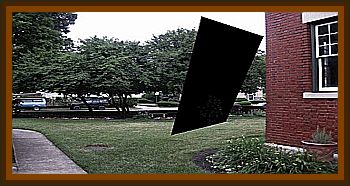 As dusk approached I witnessed in my backyard what I can only describe as a hole in the fabric of space. It was a quick event, but long enough for me to observe and mentally register the event.

When I saw it, I was unnerved to the point I left the area rather quickly, but the next morning I took a photograph from the observational vantage point and doctored it in PowerPoint to capture what I saw.

I had my head down, dragging a pressurized water hose out to the garden. As I am around the corner of the house, I looked up and observed what is shown in the image. It was about 15' to 18' from me and appeared as a black hole in space, infinitely deep. It hung there for a moment, then suddenly zipped to the right at a high rate of speed, disappearing behind the building shown in the photo.

I stood there stuned for a moment, and then quickly moved forward to look around the corner of the building. There was nothing unusual to be seen.

As it moved to the right, there was a bit of optical distortion along the left edge. That is, as it moved the edge itself remained sharp, but the view of the world adjacent to the edge was somewhat wavy, like looking through optical refraction you might see from hot air coming off a sun-baked road.

It did not change size or shape as it moved and disappeared from my field of view behind the building. There was no sound or air movement as it moved away. It was not flat in space, rather the equivalent of a twisted trapezoid sheet opening.

All of the edges were sharp and well defined. As shown, there were a few sparkles of light in the lower right hand corner, similar to stars but bluer in color. There were a few pinpoints of light that were brighter than those shown, but the overall size and intensity is basically correct.

The image I put together is not perfect, however it is a very close, solid representation of what I saw.

Nothing however can capture the infinite depth or blackness observed through the opening.