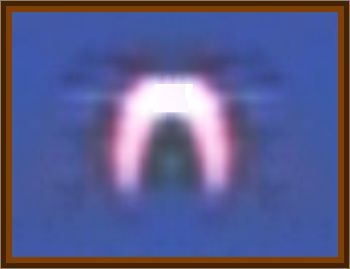 This sighting occured when I was 16 years old. I lived in a small house on a side street in Allentown Pa. It was around 10:15 p.m. I went outside to observe the stars. As usual the pleiades were almost directly overhead. The street I lived on ran east to west, so in the spring and summer pleiades seemed to rise at the east end of Emmett St., and set at the west end. This night I had been watching them for about 15 minutes and looking around the sky in the hope of sighting a meteor or 2. When to the west I spotted movement in the sky. It seemed to be very high up. as if it was the size of a 747, my guess would be that it was flying at 30,000' but I didnt know the size of the thing, however what really caught my eye was not size but color and shape. I had seen many planes fly across the night sky but none like this one. Boomerang shaped and glowing hot pink like poster paint.

It seemed to be directly over Emmett St. heading west to east. From my position I watched it approach, pass overhead and then depart. Which took all of 5 minutes. It did not seem to be moving very fast, somewhat like any other aircraft I had ever seen go across the night sky. With the exception of that weird shape and color.

I dont know if I saw a UFO or some strange military experiment. I like to think that yes, it was a UFO.