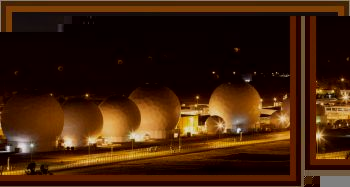 The United States has three major bases in Australia. One is in South Australia (Nurranger, near Woomera, T.N.), another in New South Wales, and the third (and by far the largest) is located within about 145 miles of the geographical center of the continent, not far to the west of Alice Springs (Northern Territory), at the foothills of the southern slopes of the MacDonnell Range. This base is completely underground, with barely visible entrances to the surface.

This 'Top Secret' base is entirely financed by the United States Government, and is officially known as the Joint Defense Space Research Facility.

When the JDSRF was first initiated, its aim was scientific research for the supposed development of a space defense technology. It is now known that since its inception, its primary purpose was research into electromagnetic propulsion.

What exactly is PINE GAP? As strange as it may seem, even Australian Federal Parliament members do not know. Among the Cabinet members, only a small number of 'initiates' have a vague idea of what this is all about. The only information source available to the public is the cross-checking done by private researchers such as Jimmy Guieu, following statements made by the United States or Australian magazines (always very short and terse paragraphs), and anything the locals may notice.

It is said that under Pine Gap is the deepest drilling hole in Australia, about 5 miles. Such a hole is likely used as an underground antenna able to recharge the batteries of submarines in the Pacific and Indian Ocean through ELF broadcasts. Such a gigantic antenna could be used to generate the gigantic stationary wave around the Earth.

Some say that Pine Gap has an enormous nuclear generator to supply energy to a new type of transceiver. It seems too that there is a high-powered, high-voltage plasma accelerator which may be put to use to transmit electric current, or even to produce a 'death-ray', or quite simply to feed a plasma gun. All this is not as incredible as it sounds:

It is now known that the US base of West Cape, near Exmouth Gulf in Western Australia (Harold E. Holt USN Communication Station), has an older type of the transceiver used at Pine Gap which is used to send electric current to submerged US submarines who trail a wire antenna. It is known that electric currents transmitted in this way are referred to as plasmo-dynamic cells.

Several times, locals have seen White disks about 30' in diameter in the process of being unloaded from large US cargo planes at the airports serving Pine Gap. Those disks had the USAF emblem on them. It seems likely that disks are assembled and based at Pine Gap. The number of disks seen at night leaves no doubt in anyones mind. An amazing quantity of furniture has been delivered by plane from the United States. The locals also say that an enormous amount of food is stocked in warehouses of what could well be a true multi-leveled underground city.

On the other hand, Pine Gap is well known as one of the most important control centers for spy satellites which circle the globe. An article published in late 1973 claimed that the Pine Gap installation, along with its sister installation in Guam, were used to control the photographic missions of the large American satellites in orbit above the Earth.