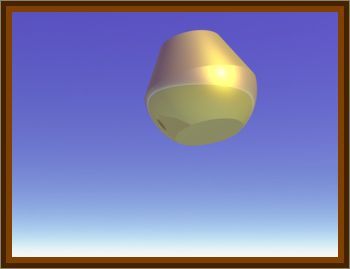 My name is Alex James. I live in Pilapila Community, New Guinea. About 7:00 p.m. last Tuesday, November 6th, 1999 I went with four friends to Pilapila Community School for rugby practice. We were going back to our village after dark when we saw some bright lights approaching. There were a lot of people about, some coming back from bathing and others were sitting around eating their dinners.

When they saw the lights, they all ran inside and locked their doors except for a few who just stood and stared. As the UFO approached us we heard no sound. The streetlights all dimmed just like a torch when the batteries are failing. It hovered over the coconut palms and looked huge. It was oblong in shape.

As it passed slowly overhead, my friends and I were almost frozen as we watched it. We felt as though we could not move or speak, because we were so shocked by the sight.

The bottom of the UFO was oblong shaped, with very bright lights all around the edges, and the top was like a pyramid shape, with lights around it also. Just bright white, no colors. It was huge and took over 30 minutes to pass by, we checked the time.

When it was hovering over us it seemed to be as bright as day, the whole place was lit up like bright daylight, that's how bright its lights were. Then the object just disappeared in the direction of the mountains near Vuvu.