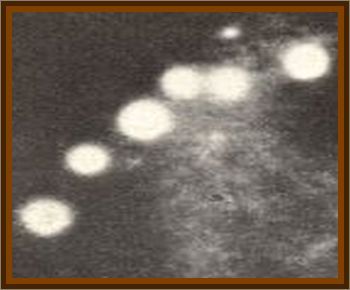 The year was 1950 or 1951 and month probably October. was on Sunday was 11:00 a.m. estimated. I was 8 or 9 and with a friend my age. We were removing black walnuts from their hull. Adults in family watched them also. My father was three miles away at a country general store and several people there saw them.

They were very high white disk flying in formation of half V, appearing as /, flying north without sound or trail. They were in formations of six, and I forget whether we counted 72 or 78 disks. Each proceding formation was more east of the last one. When one formation got almost out of view, overhead would be another formation of six. Their speed was constant. Their spacing appeared the same.

I do not know their speed but it appeared same as planes travel and altitude was very high as we were seeing small disk without detail. They did not appear to be reflective so I call them white. We were in a quiet location and there was no sound.

All the observers that I know of are deceased except two. This report is being made some 55 year after the fact. Location of event was Pike County KY. Area known as Johns Creek. Objects were north bound.