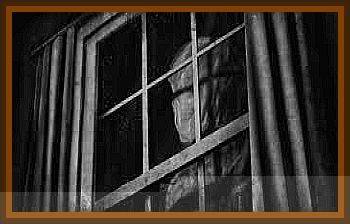 One night I found myself relaxing to some sugar coated jazz saxophone music when like the character in the Edgar Allen Poe poem, there came a tapping, a gentle rapping but at my window, instead of at my chamber door. Tap, tap, tap, I turned my head to the large bedroom window which was adorned with Venetian blinds.

I had not fully closed the blinds and was startled to see a figure standing on my roof and apparently looking through my window. I slowly turned my head away from the figure and ever so gingerly moved my hand towards the phone. Naturally, I called the police and because I lived in an affluent part of the city, the response was quick and intense. They even sent a whirlybird, checking the rooftops, not just my buildings, but all the houses at least on that side of the block.

I wonder, with all the fuss maybe there was still a governor or two residing in the midst... nah! I doubt it.

This was my first ever call to the Police Department. Nervously, I gave my report. It wasn't really not much to report because after the initial shock of seeing someone on my roof, my attention immediately turned to maintaining bladder control. Remembering the exact procedure needed to dial a telephone and naturally, to thoughts of Super Jesus, if you're out there please save me.

The police did not find anything unusual, on that side of the block, except maybe for me ( hey...don't you belong on the other side of the block? ) I shouldn't exaggerate, that opinion may have only been implied by a few raised eyebrows.

I calmed my nerves and eventually made it to sleep. The next night there I was lying in bed when, tap, tap, and tap. Once again my visitor had returned and was throwing stones at my window. I reenacted my phone maneuvers of the previous night but this time I called my girlfriend. "Lois" I said. Yes, she was a Lois but I was no Superman.

What if they come out and he's gone again?

What has that got to do with anything?

Women definitely are from Venus. Manhood aside, I called. The cops came, no whirlybird, no sympathy, no nothing.

Mr.G, do you have any friends who may be playing a practical joke on you?

Wait a minute, there was something.

It came to me when I was trying to give a description of the prowler. He was a perfect silhouette although I guess a perfect female silhouette may have wished him a little taller. What I mean by perfect is his shadowy form was without edges, without overlaps, without caps, straps or flaps, etc., or any other distinguishable shadow that would be cast from clothing.

I had seen, through the semi-open Venetian blinds, only a form. Form without function, as it was, there was no shadow cast of anything belonging to the form except the form. I kept this observation to myself. However, there was something about the height and dexterity of the prowler which made me think that the prowler was possibly a child or a pre-teen.

Perhaps on a seek-and-locate booty mission, acting in the service of more devious and criminally intentioned adults. But even as I was reporting this, the recollection of the prowler's movements weighed ominously in the back of my mind, the movements were strange yes, very strange.

The next day I discovered something that made me dubious about the competency of the Police Department. When I had told them that the prowler was on he roof, they did not make a good assessment of the facts I had given them. They did not contest my view that the prowler had done what he done, while standing erect on the roof. You see, the section of the roof where I viewed the prowler do his "Blue Man Group" thing was constructed at such an incline, it wouldn't have allowed for the prowler's ease of movement... unless the prowler had some inside trader information on the laws of gravity which most of us are not privy to. In my own investigation, the matter was not fully explored as I dared to venture out on such an incline, with a three story drop below, on all fours yet alone trying to stand upright and fancy free as the prowler had.

I was now more intrigued than fearful. That night I anticipated that another meeting was in the works but I still dreaded the outcome. Maybe I would arm myself. I knew where I could quickly obtain some weapons; after all I was still technically a teen.

However, there seems to be something inherent in my destiny that blocks my becoming affiliated with guns. Even today and, even after serving four years in the Military I have still never possessed a firearm, or fired one off, not even once.

I thought more about the figure, his below average height, and his spastic yet graceful movements. The remembering of the incident elicited a welcome yet unjustified calmness. He/it seemed to be manageable, OK this time in the physical sense), I thought I would be able to handle myself in a physical altercation if it came to that. I contemplated fully drawing up the blinds thus allowing me a totally unobstructed view of the visitor if he/it decided to pay me another visit, however the testosterone surge didn't hang around long enough for that to happen.

I did have enough residual courage left to leave the blinds fully open. This reminded me how, when as a kid, if watching a monster movie that happened to be exceptionally scary, I would clasp my thumb and small finger together on one hand and then repeat the formulation on the other hand. Slowly I would bring the joined fingers together where I would view the television and the apparition within from the perspective of the tiny diamond porthole formed by my fingers; thus believing I had diminished the threat of the beast by encapsulating it within the boundaries of my very own hands. Hey, maybe there's a spiritual truth somewhere in that, but this ain't a yoga tale.

True to form, without any known function ) the visitor appeared and, once again, threw his magic beans or whatever at my window causing the tap, tap, tap. This time as I looked towards the window I was able to maintain my composure. I watched, without acknowledging the eerie dance of curiosity that was being performed as if for my pleasure.

The figure's gyrations were reminiscent of a Marcel Marceau, executing the comical gestures of a ballet trained mime. I felt no danger from the visitor, he performed a few more gravity defying stances and struts and pranced out of view, never to be seen again.

The next several months went along as usual with no other incidents. But I gather things were happening unbeknownst to me behind the inter-dimensional scenes. My life was every so slightly yet continuously beginning to unravel. I grew distant from my girlfriend over extremely silly issues and we broke up.

Because of my active calendar, I thought it necessary and beneficial for me to quit college. I then had problems with the nature of my employer's mission and with my supervisor, which lead me to resign. Although my political alliances were growing stronger, due to my Grass Roots community agenda and my political activism I was becoming unsettled in my own neighborhood and had differences with my Landlord. So my picture-perfect life unraveled in less then seven months after my ethereal guest dropped by ( because of that weird gravity thing, I wonder if he really would have dropped, if dropped! )

Eight months after the visit, I found myself bewildered and disillusioned. Wishing to lose myself, I left Baltimore. Boarding a Greyhound bus, seven hundred dollars in my pocket, bound for destination unknown. But, this was a good thing,