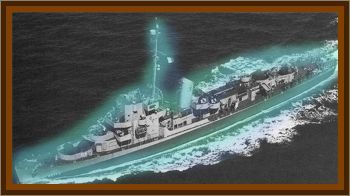 The experiment was allegedly based on an aspect of the unified field theory, a term coined by Albert Einstein. The Unified Field Theory aims to describe mathematically and physically the interrelated nature of the forces that comprise electromagnetic radiation and gravity, although to date, no single theory has successfully expressed these relationships in viable mathematical or physical terms.

According to the accounts, researchers thought that some version of this Unified Field Theory would enable the Navy to use large electrical generators to bend light around an object so that it became completely invisible. The Navy would have regarded this as being of obvious military value, and according to the accounts, it sponsored the experiment.

Another version of the story proposes that researchers were preparing magnetic and gravitational measurements of the seafloor to detect anomalies, supposedly based on Einsteins attempts to understand gravity. In this version there were also related secret experiments in Nazi Germany to find antigravity, allegedly led by SS Obergruppenführer Hans Kammler.

In most accounts of the experiment, the destroyer escort USS Eldridge was fitted with the required equipment at the Philadelphia Naval Yard. Testing began in the summer of 1943, and it was supposedly successful to a limited degree. One test, on July 22, 1943, resulted in the Eldridge being rendered almost completely invisible, with some witnesses reporting a greenish fog appearing in its place. Crew members supposedly complained of severe nausea afterwards. Also, it is said that when the ship reappeared, some sailors were embedded in the metal structures of the ship, including one sailor who ended up on a deck level below that where he began, and had his hand embedded in the steel hull of the ship. At that point, it is said that the experiment was altered at the request of the Navy, with the new objective being solely to render the Eldridge invisible to radar. None of these allegations have been independently substantiated. The conjecture then alleges that the equipment was not properly recalibrated, but in spite of this, the experiment was repeated on October 28, 1943. This time, the Eldridge not only became invisible, but she physically vanished from the area in a flash of blue light and teleported to Norfolk, VA, over 200 miles away. It is claimed that the Eldridge sat for some time in full view of men aboard the ship SS Andrew Furuseth, whereupon the Eldridge vanished from their sight, and then reappeared in Philadelphia at the site it had originally occupied. It was also said that the warship traveled back in time for about 10 seconds.

Many versions of the tale include descriptions of serious side effects for the crew. Some crew members were said to have been physically fused to bulkheads, while others suffered from mental disorders, and still others supposedly simply vanished. It is also claimed that the ships crew may have been subjected to brainwashing, in order to maintain the secrecy of the experiment.