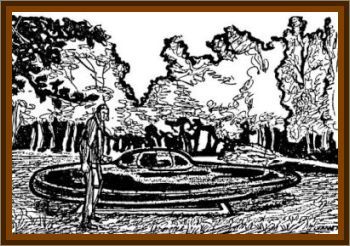 During the night, lifelong paranormal skeptic Roy Shaw was walking his dog in Devon, England. Wandering through the quiet streets of his neighborhood, he began to approach his local Lawn Bowling club, when he was startled by an odd object hovering high up in the sky. Hazy and distant at first, it began to descend slowly and move nearer in his direction. Circular in shape, it suspended itself above the bowling club and Shaw entered the grounds to get a better look at the object. He watched in amazement as it zigzagged around, before landing on the far side of the green.

He was astounded to make out a 100' long space craft, with blue and red lights streaming along it’s underside. At this point a 4' high white apparition exited from the ship and floated towards him across the lawn.

It was about 4' high and seemed to be translucent and moved very slowly towards us. I was transfixed because it made a droning noise, which sounded like my, my repeated over and over, Shaw later told newspapers. His dog, Sydney, an animal he stated is normally very placid, began growling and bearing its teeth at the spirit. At this point, Mr. Shaw ran for his life, with such haste he twisted his ankle in the process.

Another dog walker in the area claims to have seen the ship dart off into the sky at a 45° angle.

Funnily enough, Mr. Shaw still claims to be a paranormal skeptic, even after this bizarre encounter.