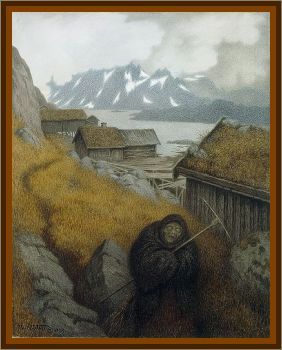 The Black Death was a tragedy for all of the Scandinavian countries, Denmark lost one third of its population, while Norway lost half.

The plaque was so devastating, the people soon made it into a character of its own. Pesta comes as the figure of death and illness, in the shape of a hideous, old woman dressed in black, carrying a broom and a rake.

She traveled from farm to farm, spreading the plague. If she carried with her the rake, some of the inhabitants would survive, but if she was carrying the broom, everyone in the family would soon die.

It is still common to mention Pesta in the context of disease and illness.