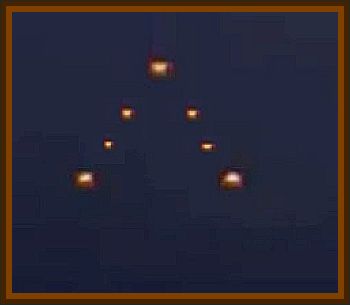 My sister, 11, and I, 14 walked out into our back driveway well after sunset. It was fully dark and there were few or no clouds in the sky. We were on a childish mission at the time. We were just out of the door when my sister said:

There, north of where we stood, against a dark sky filled with stars, was a formation of red, fiery but dull red, objects 12 to 15, arrayed in a filled in equilateral triangle traveling across the sky.

I was transfixed and rapid fire questions were zipping through my mind.

Geese? Aircraft? Sun reflection? What is altitude? Speed? Why are they making no noise?

They traveled north to south in roughly 15 to 20 seconds. I noticed slight changes in position between objects as they flew. That observation told me that they were individual objects.

Both my sister and I were very savvy science oriented kids.

These objects simply didn’t meet any criteria that related to normal.

Can you imagine standing there dumbfounded while examining every possible source in your arsenal of normal. No noise, not cloud reflection, simply doesn’t fit within experiential normal.

I had seen B52’s flying at altitude. They appeared to move slowly across the sky. I had the impression that these objects were at a high altitude and traveling very fast. In retrospect, I think the red color was frictional heating.

We ran in the house hysterical telling our mother that we had just seen UFOs. She eventually believed us and called the local newspaper the next day.

An article appeared in the Perry Daily Chief concerning our sighting.

That experience is indelibly etched upon my mind. That is the moment at which I knew beyond any doubt that UFOs did exist. Extra terrestrial? Who knows.

My sister and I witnessed a technology that just didn’t exist in that day and age in the known human realm. Further, it was apparent that each object in the formation was guided by an intelligence.