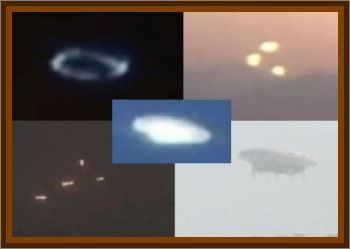 Hello. I am Luis Sanchez Perry. I wish to report that January 1998 was a big month for UFO sightings in Chile.

I have interviewed witnesses to obtain the following information:

On January 4, 1998, Pablo Marinan and his family spied a UFO over their hometown of Angol, located 250 miles South of Santiago de Chile. The object was 55° above the horizon and Southeast of us, Pablo reported. The UFO was oval in shape, a very bright light with a dark structure around it. The object was vibrating. At arm's length, it was about 1" long.

On January 17, 1998, at 9:19 p.m., Rodrigo Bravo saw a very bright white/gold light come from the South at high speed. It stopped in mid air over Santiago, above the Corrillos section, for about ten seconds, then it shot back to the South from where it came.

On January 24, 1998, Sergio Rojas and four friends drove out to Tranque Alfalfal dam in El Cajon del Maipo about 25 miles Southwest of Santiago. On their way up the mountain to the dam, they saw two balls of light pass over them at a very high speed. After a few seconds, they saw a third one, but it was travelling much slower.

Arriving at the dam,Sergio reported that he and his friends left the car and walked to the cliff's edge. From here they could see the Rio Maipo 300' below. Then the witnesses saw a cigar/egg shaped UFO about 55' long coming up the river. It was a bright white color. They heard a very high pitched tone that clogged their ears for a while. As the OVNI/UFO flew by, the group found themselves covered by a strange mist, hot and cold at the same time.

They hurried back to the car and drove down the mountain. On their way to San Jose de Maipo, they encountered a UFO that was hovering about 2500' from them. They stopped the car and got out.

The UFO looked like the moon but was slightly smaller and was white colored. After five minutes of observation, the UFO faded away like a cloud or smoke.