UFO Had Near Miss With Boeing 737 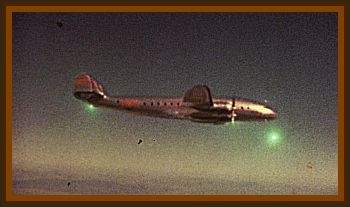 A near miss between a Boeing 737 airliner approaching Manchester Airport and a UFO was investigated by the Civil Aviation Authority, CAA.

The pilots of British Airways flight 5061 reported the incident as they flew over the Pennines on route from Milan on January 6 1995. Seventeen minutes before touchdown, a mysterious, triangular shaped UFO flashed past the right hand side of the aircraft at a distance described as being very close, so close, in fact, that the crew instinctively ducked in their seats.

Captain Roger Wills and co-pilot First Officer Mark Stuart both saw a lit object fly down the right hand side of the aircraft at a high speed from the opposite direction, a CAA report revealed.

The men were able to track the object through the right hand windscreen and side window, having it in sight for about two seconds.

Manchester Air Traffic Control recorded no known traffic in the vicinity on radar.

In files released by the Ministry of Defence,(MoD, and National Archives, correspondence reveals the MoD's take on the incident, following requests for details from the public.

In a letter dated April 1996, an unidentified MoD official said: '

With regards to the airmiss reported by the British Airways pilots approaching Manchester Airport on January 6, 1995, I can confirm that as a matter of routine the MoD was notified about the pilots report by the Civil Aviation Authority shortly after the incident occurred.

At the time I discussed the matter with the departmental air defence experts who confirmed that they were not aware of anything which would indicate a matter of defence significance associated with the sighting, or any evidence that the UK's air defences had been compromised. In the absence of such evidence, MoD interest in the sighting has long since ceased.'

Elsewhere in the 6,000 pages of files released, are accounts of an encounter between a UFO and an airliner near Glasgow Airport in December 1996.

White and red flashing lights were seen by pilots of an aircraft, at the same level, roughly 7,500'.

In April 1997, the crew of an Aer Lingus flight on route from Dublin to Amsterdam spotted an UFO.

This is an extract from the radio chatter between crew and the radar tower:

Pilot: We just had something go down the RHS just above us very fast.

Control: Well, there's nothing seen on the radar. Was it an aircraft?

Pilot:Well, it had lights, it went down the starboard side very quick, and just slightly above us, yeah.

Control: Keep an eye out for something, I can't see anything at all at the moment so, must have been very fast or gone down very quickly after it passed you I think.

Pilot: Okay. Well, there you go!

An eyewitness on the ground described the craft as triangular. However the CAA investigation failed to trace the cause of the incident with the possibility of a U.S. Stealth aircraft straying off course being discounted.