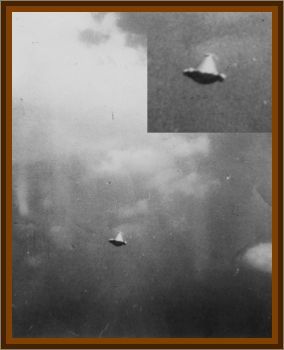 Perhaps the most impressive UFO story told during the recent Brazilian World UFO Forum was that of Haraldo Westendorf, who made news headlines a year ago when he allegedly flew his private plane within a 100' of an enormous unidentified flying object.

Westendorf says he took off in his single engine Embraer EMB 712, from the city of Pelotas near the southernmost tip of Brazil on the morning of November 5, 1996. It was to be a routine recreational flight of the kind he takes for fun whenever time allows.

On this occasion, he had been in the air only about 12 minutes and was flying at an altitude of 5,000' over a large lake some five miles southeast of Pelotas when he saw ahead of him an enormous aerial object. The time was about 10:30 a.m. He radioed the Pelotas tower to learn if they could see the object from the ground. They confirmed that the object was visible to them and asked him for a close range report. Westendorf then decided to fly as close as he could. Westendorf emphasizes that he did not believe in UFOs and says this accounts for his initial willingness to fly close to the object. He didn't feel he might be in danger.

When he got close to the object, he realized that in his 20 years of piloting experience he had never seen or heard of anything like it. Since he had done stunt training in the United States and had also flown in France, he had become acquainted with some very advanced and exotic aircraft. But he knew that this was not an airplane.

Westendorf showed several detailed color drawings of the object, with his own plane drawn to scale alongside it. He describes the object as a faceted cone, flat on the bottom with a rounded point on top. On each of the 8 or 10 sloping side panels were three large bulges, like triangle shaped bay windows on the side of a house, but they did not look like windows. The entire surface was brown in color. The structure was about 225' high and about 325' in diameter, big enough to fill nearly an entire soccer field if landed. His own plane, less than 20' wide, was tiny by comparison.

Westendorf says he spent about 12 to 14 minutes in close proximity to the object, trying to see as much as he could. Although the Pelotas air tower does not have radar, he believes the airport radar at Curitiba tracked the whole encounter. However, officials at Curitiba deny this.

The object was spinning around slowly and moving southeast toward the nearby seacoast at a speed of about 70 mph. Westendorf managed to fly entirely around the base of the object three times. At one point, he says, his wingtip came within about 130' of the object.

After his third lap around the object, Westendorf noticed that the rounded top seemed to disappear, leaving what looked like an open hole at the top. Then he saw, emerging from inside the object, a classic flying saucer. It rose sideways, its long axis vertical until it cleared the top of the larger object, then tipped down to assume its normal orientation and departed at tremendous speed. Westendorf said that this saucer was about 30' in diameter, or nearly twice as wide as his own plane, and he thinks it flew away at more than Mach 10. The saucer showed no indication of noticing Westendorf's presence nearby.

As soon as the saucer disappeared, Westendorf decided to try to fly over the top of the object. Brazilian media later reported that he wanted to fly his plane into the interior of the object, but he says he never even considered that. He only hoped for a peek through the opening. To get more altitude, he flew his plane 1000' away from the object, turned around and began a steep climb. He noticed that the object was now rotating much faster. Then he saw brilliant beams of red light shoot from the top of the object toward the sky. He quickly abandoned his plan to fly over the top.

Then, to his amazement, the object rose straight up at tremendous speed. For the first time, Westendorf was scared, because he believed the object's rapid acceleration might produce a shock wave of turbulence that could overwhelm his own plane. As a trained pilot, he knew that air traffic controllers recommend staying at least 3 minutes behind a large aircraft to avoid such turbulence. He estimated that the unidentified object probably weighed at least three times as much as a 747 jumbo jet, so its shock wave should be huge, and he was only a few hundred feet away. He quickly began emergency procedures in case his plane went into a spin or a stall. But to his surprise, he did not encounter any turbulence.