On Our Drive Home... 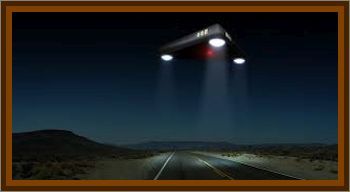 I spent the last two days debating whether or not to share my experience. I have decided to share it as I cannot seem to surpress the image from my mind. Here goes:

My co-worker and I had just returned from Kamloops, British Columbia, and had arrived in Whitehorse fairly late, Midnight, and because we had a meeting in Pelly Crossing the following afternoon, we had decided to drive straight home so that we could get some extra sleep in the morning so away we went.

We had a pretty uneventful trip from Whitehorse to Carmacks, however we had just arrived at Five Fingers Rapids for a short bathroom break. After admiring the stars, we hit the road.

Shortly after our departure from Five Fingers Rapids, my co-worker seemed a little uneasy and kept looking in the side view mirror and turning to look out the back window, I kept driving along not paying much mind to it. However, she repeatedly looked out the windows and it was when we had just passed Tatchun Creek Campground when I asked her what was up.

She had told me that there is something following us, and that she had noticed it when we left Five Fingers Rapids. She added that it was a light of some kind and it would change locations from time to time as we traveled along. She explained to me how it had been behind us when she noticed it, and a few minutes later, it was more to her side of the vehicle and at the moment she was explaining it, she told me it was now on my side.

I dared not to look, as I was then getting scared, so I continued driving as she monitored the location and distance of the ever moving light. It was not until we had reached the long stretch in Minto when I had noticed the bright white light in the hills. I asked my co-worker what it was and she said that was what was following us.

I sped up a little but could not help but look over at any chance I had.

My co-worker said: It's hard not to look at it, it's kind of mesmerizing.

It was far too close to be a star, it almost looked as if it were a loader on top of the hills, it was like one bright headlight or something.

We then reached the end of the stretch and started making our way up the hill. Nearing the top of the hill, my headlights were shining in the direction of the object. It was then when it disappeared over the hill as if it were hiding.

As we started turning, and my headlights were moving away from the direction the object was in, it reappeared and began to come over the hill and hover downwards. The trees directly under the object were glowing which confirmed that it was not a star nor a loader/vehicle. It was definitely a flying object of some sort.

It stayed on the right side of us all the way to Pelly, staying lower to the hills. When we had arrived in Pelly Crossing, the object was hovering to the northeast of Pelly. When we turned up the Jon Ra Subdivision in Pelly, it then shot right across the sky going north, as if it were heading to Dawson.

That was when I freaked out and stopped at the nearest house and turned the vehicle off.

My co-worker and I stepped out of the vehicle to look at it. It began to move in small circular motions for a few seconds and then stayed in one spot. We could hear the object, it was almost the sound of an idling car but very faint with a slight high pitched squeal. As we looked at the object, I noticed the shape and colors of it. It was a triangular shape with a large headlight on the top of it, two blinking red lights on both sides of it and a faint blue beam under it.

I don't know what you want with this story but I wish to remain anonymous.

I have tried as best I could to make an image as accurate as possible, but my software, Publisher, is very limited. It was very bright, almost like a police car spotlight. People have told me about a sighting in Nunavut last week and apparently there was a video recording of it that matches our description! Scary stuff!