Man has Close Encounter With UFO 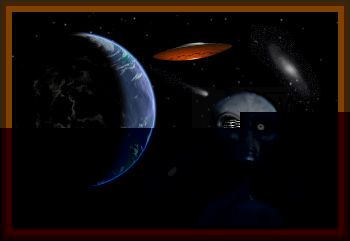 Retired automobile salesman Tom Dawson, 63 years old, at the time, took a walk down to his favorite pond to see how it looked for fishing later that day.

Just as he got inside the fence surrounding the pond, a circular space ship zipped right in between the trees and hovered just a few feet above the ground. At the same time he found himself, his 2 dogs and 20 head of cattle, frozen in place by an unseen force.

Dawson said the craft was about 15' high and 50' in diameter. It had portholes all around and a dome on top. It made no sound and changed colors rapidly from one to another. A ramp came down and out came 7 hairless, snow white beings, about 5' tall, with pointed ears and noses.

Some had on tight fitting one piece suits while others wore nothing. They talked in a high pitched’ gibberish he could not understand.

They conducted what he thought to be a medical exam of some kind. They placed a skullcap like device on his head and a large hula hoop shaped thing, connected to a box, around his midsection.

After they had collected some leaves and stuff, they got back on the ship and were gone in the blink of an eye.

Once free, Mr. Dawson ran uphill, about 1,000', to his trailer. He was having trouble breathing and talking, so he was taken to the Mitchell County Hospital, where the doctor said he had been shaken both mentally and physically from his encounter with the UFO and its occupants. He was treated for hysteria given something to calm him down, and later released.

Dawson said he believed that if he had been a younger man the extraterrestrials would have taken him away.

Another summary of this case describes an interesting and bizarre aspect of this case which is not included in the above account.

Tom Dawson, 63 and retired, was walking with his 2 dogs from his trailer home to a nearby farm when a circular shaped space ship with a dome and portholes, 40' to 50' in diameter and 12' to 14' high, set down in a field in front of him, hovering several feet off the ground.

He found he was unable to move a muscle, and his dogs, as well as the cattle in the field, seemed likewise to be immobilized.

A hatch in the object opened, a ramp was extended, and 7 strange looking humans 5' tall emerged, 5 men and 2 women.

The first to leave stepped down cautiously, as if to test the solidity of the ground, then the rest followed, with 2 taking up sentry positions at the hatch.

They were all hairless, with skin as white as a flour sack, their noses were sharp and turned up, their ears were pointed, and they had no necks.

One of the men and one of the women were completely nude. The clothing of the rest of the males and females alike, was very beautiful with silk like shoes with pointed, turned up toes.

The humanoids cautiously approached Dawson, and gave him a kind of physical examination, placing on his head a skullcap with cords connecting it to a hoop, bearing dials. They dropped his trousers and lifted his shirt for the examination, passing the hoop over his body. While the examination was in progress, a loud voice came from the object, shouting 3 times:

I am Jimmy Hoffa.

A fourth repetition was cut off, and the voice was not heard again.

After completing the examination, all returned to the craft except 2 men, who walked about 10' away and went into a conference. They had very shrill voices, and although Dawson was unable to comprehend what it was they said, he thought he heard the word Jupiter.

He had the impression they were debating whether or not to take him onboard, at any rate, they did not, and the leader passed his palm across his chest as though to signal good-bye.

They reentered the ship, closed the hatch, and took off.

Tom saw the object rise to 75', and then in a wink it was out of sight. Dawson was then freed of his paralysis, he ran directly to his next door neighbor,

But was so excited he could say nothing more than space ship.

He was taken to a hospital and treated for hysteria.