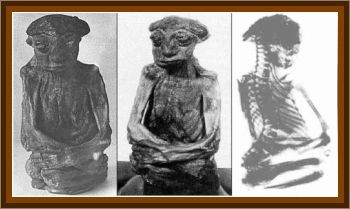 Oral traditions of many Native American tribes, including the Arapaho, Sioux, Cheyenne, and Crow, tell of "little people” who stand from just 20" to 3' tall. In some tribes they are known as tiny people eaters, in others they were known to have been spirits and healers, and some believed them to be magical, similar to leprechauns or fairies. In any event, the legends were well known among Indians across the nation, long before the Europeans set foot upon these lands.

To the Shoshone Indians of Wyoming, this small race of people were known as the Nimerigar, and their legends told of the little people attacking them with tiny bows and poisoned arrows.

The Nimerigar were also known to kill their own kind with a blow to the head when they became too ill to be an active part of their society. Though part of the legend, this practice of sometimes killing the infirmed was a also a regular part of life for many of the nomadic Indian tribes.

Though many believe these little people, to be only the stuff of legends, several discoveries point to the contrary, the most significant of which, was a 14” inch fully formed mummy found in 1932. Called the Pedro Mountains Mummy, he was discovered when two men were digging for gold in the San Pedro Mountains about 60 miles southwest of Casper, Wyoming.

After continually working a rich vein and running only into more and more rock, Cecil Main and Frank Carr used dynamite to blast a section of the mountainside to get at the gold. After the dust cleared, a cave could be seen in the rock face. The small cavern was about 15' long and 4' high and had been totally sealed off from the outside world by a thick wall of rock.

As the men entered the cave they were surprised to see a small a pygmy like man sitting cross legged upon a ledge. The tiny mummy was only about 6½" tall in its seated position, and estimated at 14" tall in a standing position. Its skin was brown and wrinkled, its forehead low and flat, its features displaying a flat nose, heavy lidded eyes and a very wide mouth with thin lips. The face looked like of an old man. It was so well preserved, its fingernails could still been on its hands and the top of its head was covered in a dark jelly like substance that was still pliable.

The two prospectors took their find to Casper, WY and in no time, scientists came from all over the nation to have a look at the mummy.

Certain it was a hoax, extensive tests were performed when the professionals assumed it was a pieced together work of taxidermy. However, the anthropologists would soon be surprised to see that x-rays displayed a perfectly formed, manlike skeleton. The tests also showed that the mummy had been killed violently, as the spine was damaged, a collarbone broken, and the skull had been smashed in by a heavy blow. The soft substance at the top of the head exposed brain tissue and congealed blood. After the tests were complete, the scientists estimated that the mummy was a full grown adult who was approximately 65 years old at the time of his death. One odd finding was that its teeth were overly pointed, having a full set of canines.

These examinations were allegedly performed by the American Museum of Natural History, and certified genuine by the Anthropology Department of Harvard University.

However, alternate reports also say when the mummy was examined by the University of Wyoming, the body was found to be that of a diseased child.

The mummy was displayed in sideshows for years, before it was purchased by a Casper businessman named Ivan T. Goodman. When Goodman died in 1950, the mummy passed into the hands of one Leonard Walder, a New York businessman who died in the 1980's.

It has not been seen publicly since and it's whereabouts are unknown.

Other skeletons of the little people have said to have been found in other areas of the U.S. Near Cochocton, Ohio, a burial ground was reportedly discovered that contained the numerous remains of a pygmy race of people only about 3' tall. In 1876, another ancient graveyard was documented as having been discovered in Coffee County, Tennessee. The reports indicated the cemetery, covering some six acres, held the remains of thousands of dwarf like people.

Though the little mummy has been lost in history, it continues to be a scientific curiosity and to many, and to others, only the stuff of legends.

Allegedly, the Pedro Mountains Mummy brought bad luck to those who possessed it and Native Americans continue to warn their people to be aware of the tiny people eaters, who are still said to live in the mountains and high places of Wyoming.

As to the prospectors who originally found the mummy, they soon returned to continue their search for gold. They registered their claim in Carbon County as the Little Man Mine, but it never produced the gold that they had hoped for. Today, a sign still stands in Shirley Basin that signifies the location of the mine.