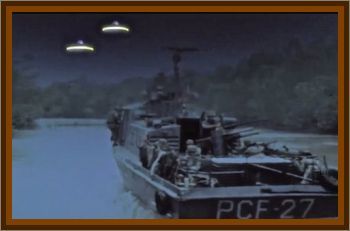 In the demilitarized zone between North and South Vietnam, something incredible happened.

We now share evidence that UFOs have directly battled and killed American and foreign soldiers.

On this night, Lieutenant Pete Snyder and the American crew of the patrol boat PCF 12 are starting their routine patrol near Cua Viet.

At approximately 12:30 a.m., Snyder gets a frantic message from the other patrol boat in the vicinity, PCF 19, which is commanded by Lieutenant Davis.

Lieutenant Davis reports that they are under attack by enemy helicopters. At the time, the Vietnamese did not have helicopters.

The term enemy helicopters is the military’s code for UFOs. In 1973, General Brown is addressing the media, and he said:

I don’t know if this story’s ever been told before, but during the Vietnam War, we were plagued by UFOs. We didn’t call them UFOs, we call them enemy helicopters.

Lieutenant Snyder’s boat proceeds at maximum speed towards Lieutenant Davis’s location and as they get closer, Snyder and his crew see 2 UFOs covered in a strange glow hovering above Davis’s patrol boat.

Then there’s a flash of light and an explosion, and the boat is completely destroyed.

In an instant, the UFOs zip out to sea and disappear. Snyder’s crew can only find 2 men who survived the UFO attack. The survivors tell Snyder that the UFOs had been following them for miles up the river.

The Navy instructs them to continue their patrol upriver. Suddenly, Jeff Steffes, the second engine man, sees 2 aircraft hovering off both the port and starboard sides of their boats. Lieutenant Snyder realizes these are the same UFOs that he spotted hovering over Davis's boat before the fateful attack.

With the UFOs now closing in, Snyder is determined to protect his patrol boat and crew. So he orders all hands on deck to engage with the UFOs. The crew fires at the UFOs, but the objects didn’t slow down, and they kept coming closer.

Snyder’s boat is sprayed with ammunition from the UFOs. The crew continues to shoot the UFOs while their patrol boat is now trying to escape at full speed.

Steffes, the second engine man, now gets a good look at the UFOs in the moonlight. He describes them as having a rounded front like an observation halo with what looks like two crewmen sitting side by side, but oddly, he can’t see any weapons on the craft.

Lieutenant Snyder, fearing what might happen next, turns his patrol boat back towards the China Sea, where the U.S. naval fleet is stationed. The UFOs are still in pursuit.

At about 3:20 a.m. Phantom F4 fighter jets are deployed from Da Nang to provide air support to Snyder’s patrol boat. Soon, the Phantom F4s are in hot pursuit of the UFOs.

Meanwhile, an Allied ship of the Royal Australian Navy, HMAS Hobart, was also in the China Sea, and it too reported seeing 30 strange lights hovering close to their ship. The Hobart’s commander radios in that 2 UFOs are rapidly approaching their boat. The U.S. Navy jets Phantom F4s fire several missiles directly at the UFOs hovering over the Hobart. As soon as the jets fire the missiles, the objects just simply vanish into thin air.

With the UFOs gone, the Navy assesses the damage. The artillery rounds that the UFO shot at Snyder’s boat turned out to be the exact same rounds that Snyder was shooting at the UFOs.

Just before daybreak, a missile comes in from out of nowhere, no warning at all, and hits the Hobart’s starboard side, killing Australian seamen R.J. Buttersworth and wounding 2 additional seamen. The Hobart crew runs up to their battle stations, and now they see 2 UFOs off their starboard side, but before they can respond, 2 more missiles are fired at their ship, killing their chief electrician. The missiles penetrate the ship’s structure, causing extensive damage.

The surviving crew from the Hobart gets a quick glance at the UFOs before they disappear, and they match the same description of the UFOs that attacked Lieutenant Snyder’s boat earlier that evening.

The U.S. Navy and the Royal Australian Navy launch a formal investigation.

An investigation on the Hobart incident revealed that a fragment of one of the missiles fired on the patrol boat had a serial number that they were able to trace. And that number was traced back to missiles fired at the UFOs by the U.S. Phantom F4, the same jet that was deployed from Da Nang airbase the night before.

The official report of proceedings filed on the Hobart incident concludes that it is a case of friendly fire. But no explanation was released about the PCF 19, which was commanded by Lieutenant Davis.

UFOs were seen up around the DMZ in 1968, and this resulted in quite a battle, the two separate incidents, in this encounter in Vietnam, we see UFOs that seem to have the capability to turn our own weapons against us. After it occurred, U.S. command ordered their fighter pilots and naval ships not to fire on UFOs.