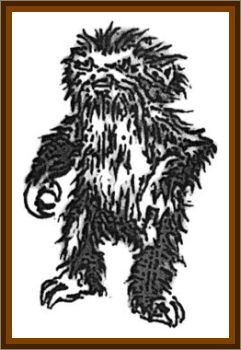 Three young men were driving home from a dinner engagement in San Carlos, Venezuela. One of the men, Jesus Paz, asked the driver to stop by the road so that he could relieve himself. Shortly after he stepped off the side of the road, his friends heard him scream and, rushing to his aid, found Paz unconscious on the ground.

A short distance away, a hairy looking little man was running toward a flat, shiny object which hovered a few feet off the ground. The object rose from the ground with a deafening buzzing sound and disappeared into the sky.

Paz was rushed to the hospital by his friends where he was treated for several long, deep scratches on his right side and along his spine. Authorities who interviewed the men said that all 3 were badly frightened and that Paz was in a state of shock.

On the same evening as the San Carlos incident, two young rabbit hunters, Lorenzo Flores and Jesus Gomez, were being interviewed about their reported encounter with strange little men on the night of December 10.

The two had been hunting near the Trans-Andian Highway between Chico and Cerro de Las Tres Torres. They saw a bright object off the highway and approached it, thinking it was a car.

They found it to be a shiny object which looked like two metallic soup bowls placed together lip to lip. They estimated its diameter to be about 9' and said it was hovering about 3' off the ground. Fire was issuing from its belly.

Then the boys saw four little men coming out of it. They said the creatures were about 3'tall and hairy. They spotted the boys and the four set upon Jesus and tried to drag him toward the saucer. Lorenzo used his shotgun as a bludgeon and tried to beat them off, since he knew it was unloaded and he had no time to load.

The gun seemed to have struck rock or something harder, as it broke in two, Flores reported later.

Jesus fainted during the melee, and Flores remembered only the apparent light weight of the little men, their hairy bodies, and great strength.

Investigation by authorities at the scene revealed signs of a struggle, and one of the doctors who examined the boys said both were almost hysterical when he questioned them.

Both exhibited scratches and bruises and their shirts were torn to shreds.