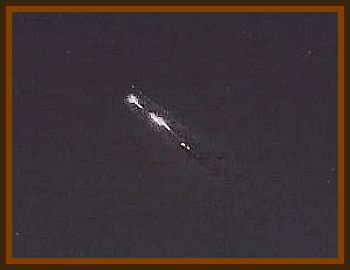 I watched two Star like objects in the Eastern night sky with a smaller one moving between the two.

We were camped on the banks of Small River and several miles from the nearest town. As we were lying on our backs observing the night sky, one of the scouts points to the northeast and said:

Sure enought moving at what seemed a slow rate of speed was a light in the night sky, it would have looked like a star if it had not been moving.

Although they were very far apart and moving slow, over the next 20 to 30 minutes they had come within approximatly an inch of one another.

Then a flash of light occurred between the two objects and the one on the right coming from the southwest disappeared, and the one from the northeast continued it's southwestern flight until it disappeared some time later.

We were shocked and amazed, and to this day this has remained an unforgettable experience.

I was playing out side one night with the kids next door when their Father called us all over to him to show us something going on in the Eastern Sky.

Two Star looking objects very high in the night sky moving slowly. There was three adults and maybe eight kids. The adults were outside on blankets to get out of the hot houses.

My Parents was out side on the porch but was not ready to watch UFOs in the Sky, but I was and I laid down and watched for maybe 30minutes before I had to go to bed. I was Nine years old and been to all the shows about monsters and space ships.

As we watched these two objects we saw something smaller than the other two move from below one and go to the other, as this was happing one of the Grand Parents that was out side with us said that this was the second time they saw this smaller obect move from one to the other.

I have no Idea what we saw but we did see it happen. Its good to know someone else saw it to.

Date is approximate. Almost no man-made satellites have a westerly groundtrack, so anything flying to the west would not be a satellite.