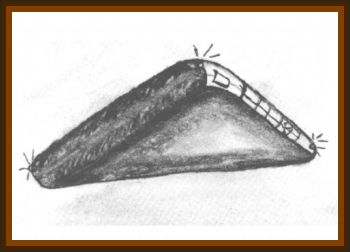 Gary Oickle, 24, his brother David, 22, and 2 friends, Barry Smith, 22 & Ken Cabot, 25 were around a campfire talking in Patapsco State Park at the Baltimore & Ohio railroad tunnel.

Barry & David were about 50' away from the others when they noticed a strange object in the southeastern sky which disappeared over a ridge in the distance.

They watched the object for about 10 seconds and could see no particular details except a rough shape. Barry described it as a flat looking object.

They then walked back to the fire to tell the other 2 about what they had seen when another similar object appeared directly over the 4 of them from behind a ridge to their North.

The object was described as a huge triangular shaped object with large windows and 3 white lights at the corners. The size was estimated from ¼ the size of a football field to 150' 200' on each side.

The object moved very slowly, hovering at times, in a southeastern direction following the contour of the ridges just above the trees.

When it appeared above them it was very low, approximately 200' to 250', and made a sound like a quiet wind or quietly rushing waterfall.

The witnesses watched the object for approximately 15 to 20 seconds until it disappeared behind the trees. 3 of the witnesses thought they could see the shadow or silhouette of a figure at the windows. Other witnesses also reported seeing a bright star like object in the southern sky immediately after the sighting. 2 of them said the ,bject changed colors; blue/green/yellow & red, repeatedly, while the other thought the object may have been a helicopter or something in the distance.

2 of the witnesses thought that the large triangular object had a metallic or bluish/gray color, but all agreed that it had 3 white lights at the corners and a blinking red light on the top.

None of the witnesses were frightened by the experience but, quite the contrary, were very curious and even yelled at the object hoping it would land. All had also read something of UFOs previously but none had seen anything like this before.