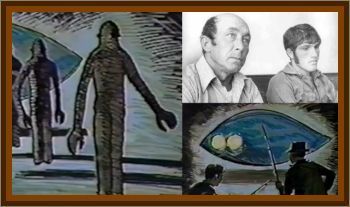 This abduction case has remained, after the Betty and Barney Hill case of 1961, the second most famous UFO abduction case in history, according to UFO historian Jerome Clark. Charles Hickson, the chief claimant in the Pascagoula, MS, UFO abduction case, died of a heart attack on September 9, 2011, at the age of 80. Until his death he maintained the truth of his alien encounter part of the UFO flap of 1973.

There is some controversy over the case, it will be described after the main story.

Involving two men, 19 year-old Calvin Parker and 42 year old Charles Hickson, both of Gautier, MS, who were fishing in the Pascagoula River when they heard a buzzing noise behind them. Both turned and were terrified to see a 10' wide, 8' high, glowing egg shaped object with blue lights at its front hovering just above the ground about 40' from the river bank. As the men, frozen with fear, watched, a door appeared in the object, and 3 strange beings floated just above the water towards them.

The beings had legs but did not use them. They were about 5' tall, had bullet shaped heads without necks, slits for mouths, and where their noses or ears would be, they had thin, conical objects sticking out, like carrots from a snowmans head. They had no eyes, grey, wrinkled skin, round feet, and claw like hands.

2 of the beings seized Hickson, when the 3rd grabbed Parker, the teenager fainted with fright. Hickson claimed that when the beings placed their hands under his arms, his body became numb, and that then they floated him into a brightly lit room in the UFOs interior, where he was subjected to a medical examination with an eye like device which, like Hickson himself, was floating in mid air.

At the end of the examination, the beings simply left Hickson floating, paralyzed but for his eyes, and went to examine Parker, who, Hickson believed was in another room. 20 minutes after Hickson had first observed the UFO, he was floated back outside and released. He found Parker weeping and praying on the ground near him. Moments later, the object rose straight up and shot out of sight.

Expecting only ridicule if they were to tell anyone what had happened, Hickson & Parker initially decided to keep quiet, but then, because the government might want, or ought, to know about it, they telephoned Kessler Air Force Base in Biloxi. A sergeant there told them to contact the sheriff. But uncertain about the reception their bizarre story might get from the local law, they drove to the local newspaper office to speak to a reporter. When they found the office closed, Hickson and Parker felt they had no alternative but to talk to the sheriff.

The sheriff, after listening to their story, put Hickson & Parker in a room wired for sound in the belief that if the men were left alone they would reveal their hoax, of course they did not. The local press reported their tale, the wire services picked it up and within several days the Pascagoula Encounter was major news all over the country. The Aerial Phenomena Research Organization ( APRO ), founded in 1952, sent University of California engineering professor James Harder to Mississippi to investigate, J. Allen Hynek, representing the Air Force, also arrived. Together they interviewed the pair. Harder hypnotized Hickson but had to terminate the session when Hickson became too frightened to continue.

The pair’s veracity was accepted by both Dr. Hynek and James Harder, both of whom rushed to interview the abductees.

Harder tried unsuccessfully to hypnotize the men, but did conclude they had experienced an extraterrestrial phenomena. Hynek believed the pair had at least had a very real, frightening experience. The sheriff’s department also felt the men were telling the truth, and Hickson requested and passed a lie-detector test arranged by the agent with whom the men had signed a contract to promote their story. Parker suffered a breakdown and was briefly hospitalized.

The men’s fantastic report drew much skepticism. Famed UFO skeptic Philip J. Klass noted discrepancies in Hickson’s account, for instance, once referring to the creatures as having a hole for a mouth but later calling it a slit. Klass also pointed out that the lie-detector test was conducted by an inexperienced polygraph operator, and that Hickson refused to take another administered by an expert police examiner. Still, some of Hickson’s behavior is questionable. For example, he kept adding to his story. He claimed on a television show a month later that the interior lights of the UFO had been so intense as to cause eye injury lasting for three days, although an extensive hospital examination the day after the incident had shown no such eye damage.

Based on other evidence, including the fact that Hickson had once been fired for improperly obtaining money from employees under his supervision, Klass concluded the case was a hoax.

When all the facts are weighed, the preponderance of evidence appears not only to favor the hypothesis involving the hypnagogic state but to provide corroboration as well.

The sheriff of Pascagoula County added:

My name is Fred Diamond and I am sheriff of Pascagoula, Mississippi. On October 11th, 1973, two local men, well known to me, Charles Hickson, 45, and Calvin Parker, 19, staggered into my office at 6:00 p.m. in a distressed condition.

They reported to me and Detective Tom Huntley that they had been fishing along the Pasagoula River when they sighted a strange silvery craft, about 100' long, which descended from above to within 30' of them, where it hovered while emitting a blue light. They stated that a hatch in the craft then opened and three gray looking aliens floated out. The aliens appeared to Hickson and Parker to have wrinkled skin, claw like hands, and a single slit for an eye.

Parker said he then fainted, but Hickson stated he was immobilized before being floated aboard the craft, where he was laid face up on a table. A huge electronic eye then examined him from head to toe at close range. The men stated that about 20 minutes later they suddenly found themselves outside the craft once again.

At first we did not believe this statement by Parker and Hickson, for obvious reasons.

We continued to interrogate them to try to break down their unlikely story, but they insisted on what they had seen. The first thing they wanted to do was to take a lie detector test. Charlie appeared badly shaken. You don’t see a 45 year old man cry unless something terrible has happened. Also, I heard Calvin praying to himself when he thought nobody could hear. In order to investigate their claims further, Detective Huntley and I left Hickson and Parker alone after interrogation, with the tape recorder still running. The two men talked between themselves as follows:

Parker: I’ve got to get home and get to bed or see a doctor or something.

Hickson: I’ve never seen nothin’ like it. I can’t believe it, you can’t make people believe it.

Parker: My arms just froze up and I couldn’t move. Just like I’d stepped on a goddamn rattlesnake.

Hickson: I know son, I know.

Parker: It’s hard to believe…. Oh God, it’s awful… I know there’s a God up there…

The two men appeared to be ill and were taken to the local hospital. It was suspected they suffered from radiation poisoning. On examination they were found to be free of radiation and well enough to return to their jobs at the local shipyard. I reported the incident to Federal Authorities, for further investigation.

In my opinion, for what it’s worth, Parker and Hickson are just two country boys, and neither of them has enough imagination to concoct such a tale, or enough guile to carry it off.