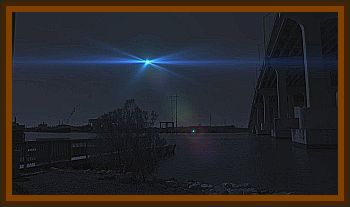 My name is Fred Diamond and I am sheriff of Pasacagoula, Mississippi. On October 11th, 1973, two local men well-known to me, Charles Hickson, 45, and Calvin Parker, 19, staggered into my office at 6 pm in a distressed condition. They reported to me and Detective Tom Huntley that they had been fishing along the Pasagoula River when they sighted a strange silvery craft, about 100 feet long, which descended from above to within 30 feet of them, where it hovered while emitting a blue light. They stated that a hatch in the craft then opened and three gray-looking aliens floated out. The aliens appeared to Hickson and Parker to have wrinkled skin, claw-like hands, and a single slit for an eye. Parker said he then fainted but Hickson stated he was immobilized before being floated aboard the craft, where he was laid face up on a table. A huge electronic eye then examined him from head to toe at close range. The men stated that about twenty minutes later they suddenly found themselves outside the craft once again.

At first we did not believe this statement by Parker and Hickson, for obvious reasons.

We continued to interrogate them to try to break down their unlikely story, but they insisted on what they had seen. The first thing they wanted to do was to take a lie detector test. Charlie appeared badly shaken. You don’t see a 45 year old man cry unless something terrible has happened.

Also, I heard Calvin praying to himself when he thought nobody could hear. In order to investigate their claims further, Detective Huntley and I left Hickson and Parker alone after interrogation, with the tape recorder still running. The 2 men talked between themselves as follows:

Parker: I’ve got to get home and get to bed or see a doctor or something.

Hickson: I’ve never seen nothin’ like it. I can’t believe it, you can’t make people believe it.

Parker: My arms just froze up and I couldn’t move. Just like I’d stepped on a goddamn rattlesnake.

Hickson: I know son, I know.

Parker: It’s hard to believe. Oh God, it’s awful. I know there’s a God up there.

The 2 men appeared to be ill and were taken to the local hospital. It was suspected they suffered from radiation poisoning.

On examination they were found to be free of radiation and well enough to return to their jobs at the local shipyard. I reported the incident to Federal Authorities, for further investigation.

In my opinion, for what it’s worth, Parker and Hickson are just 2 country boys, and neither of them has enough imagination to concoct such a tale, or enough guile to carry it off.