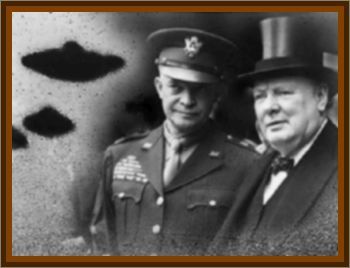 Once the embers of World War II had finally died down across Europe, and the Cold War began to chill, both men were indirectly involved in very strange alien encounters.

The Flying Saucer Working Party began in October 1950 at the the request of MoD, Chief Scientific Advisor Sir Henry Tizard (pictured). He felt that UFO reports required a serious study and duly authorized a small team to look into the phenomenon.

A response was provided to Churchill less than 2 weeks later, based on a study in 1951, concluding that all reports were explainable as hoaxes, natural phenomenon or the delusions of the observer.

The study referred to was the work of the Directorate of Scientific Intelligence & Joint Intelligence Committee - DSI/JTIC Report No. 7 (National Archive reference DEFE 44/119). The report dismissed the Scandinavian ghost rockets as atmospheric phenomena. It defined cases from Projects Sign and Grudge as due to explainable aerial objects, illusions, hoaxes or psychologically disturbed witnesses. The fatal Thomas Mantell case in the USA was blamed on the pilot chasing Venus.

It was just as dismissive of UK cases but notably it did not mention “foo” fighter sightings during wartime. The conclusions were:

When the only material available is a mass of purely subjective evidence, it is impossible to give anything like scientific proof that the phenomena observed are, or are not, caused by something entirely novel, such as an aircraft of extraterrestrial origin, developed by beings unknown to us on lines more advanced than anything we have thought of. We are, however, satisfied that the bulk of the observations reported do not need such an explanation, and can be accounted for much more simply. There is a very old scientific principle, usually attributed to William of Occam, which states that the most probable hypothesis is the simplest necessary to explain the observations. We believe that this principle should be applied to the present case, and accordingly conclude that all the observations reported were due to one or other of the following causes:

• Mistaken identification of conventional aircraft, balloons, birds, or other normal or natural objects.

The Working Party had also liaised with American counterparts in the CIA to debunk sightings and impose a tight security clampdown to ensure the more puzzling cases did not reach the media. Skeptics interpret this, as a wise move to avoid a dangerous , possibly nuclear, confrontation with the Soviet Bloc during a very paranoid phase of the Cold War.

But was there something more to all of this? The report also mentioned a Flying Saucer crash:

"We have been informed, in conversation with a member of the United States investigating team, that the even more sensational report of the discovery of a crashed “flying saucer,” full of the remains of very small beings, was ultimately admitted by its author to have been a complete fabrication."

One British citizen who actually heard radio broadcasts confirming a saucer crash in 1947 was entertainer Hughie Green. Green recalled that whilst driving across the USA, in Summer 1947, he heard numerous radio reports that a flying saucer had crashed in New Mexico and that the United States army were moving in to investigate. After promises that the story would be updated he then recalled that everything went silent. In his dying days during the 1990s he confirmed in a letter that he heard on the radio that a UFO crash occurred in the Tucumcari area.

Esteemed UFO researcher and journalist Dr. David Clarke, however, appears to have taken the FSWP report as official confirmation that the Roswell story is a fabrication and myth. "I Don't Want to Believe" seems to have been his mantra ever since the MoD gave him access to their UFO files.

However the report almost certainly points to the Frank Scully story featured in the book 'Behind the Flying Saucers' of a crashed flying saucer in Aztec, New Mexico in 1948. Neither Roswell, nor Aztec, is directly referenced in the report which concluded:

“….we recommend very strongly that no further investigation of reported mystery aerial phenomena be undertaken, unless and until some material evidence becomes available.