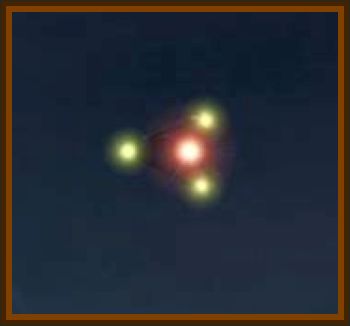 I was a boot and in charge of a squad sized detail of marines, as we marched to the chow hall while on mess duty.

While we were marching, we all just stopped as we saw 3 bright lights approach us over water, this was at 4:00 a.m.

The 3 lights seemed to come in close to us, and glow brighter as they approached. They grew smaller, and flew off in 3 different directions at great speed. I then continued taking the troops to the mess hall.

While there, one after the other marines who were with me, approached me and said:

You must tell the drill instructor what we saw.

I had no hope of surviving the day if I told the drill instructor what we saw.

But when we arrived back at the barracks, I went to the drill instructors door, knocked, and he came out.

After all the usual harrassment, he told me to step into his office.

The other boots went in one by one, and also came out unscathed.

The next day, I was called into the drill instructors office again, and there were 2 men in suits and sunglasses there. They asked me the same type of questions, and dismissed me.

I never heard of anything after that, but searched for years for the incident.

I was promoted to PFC on Parris Island. I am sure it was not because I was the best marine in my platoon, platoon 311, 3rd battalion.