A Sighting In Parkstone 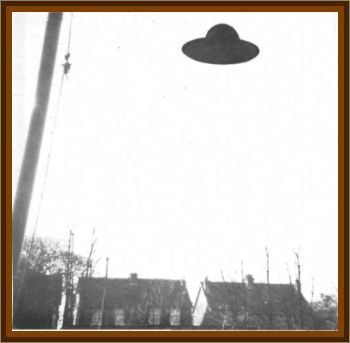 Mrs. Ethel May Field, 62, was in her backyard taking clothes off the clothesline. She heard a humming noise and looked up. The sky was clear. Approaching from the south southwest she saw a circular object with a dome on top emitting brilliant light. Its surfaces were gray, and brilliant blue/yellow maybe green? light was being emitted from the underside.

The object appeared to be about 20' in diameter. Through windows in the dome she saw 2 humanoid figures visible almost to the waist.

The object stopped and hovered above her garden, its light so brilliant that she put her hands up to shield her eyes. When she did, she felt heat on her hands and a trembling or vibration of the ground for a few seconds.

The occupants had silver suits and headgear. Their faces appeared slender, their arms normal, their hands covered by silvery material.

The figure on the right appeared to be operating controls, his hands extended downward and out of sight. The being on the left was looking directly at her, and made a gesture as if pointing downward, which she interpreted as being an intention to land. This alarmed her and she ran back to the house to alert her husband and child. She paused at the door to glance back and saw the object speeding away to the northwest.

In the following week she developed skin irritation on the palms of her hands, which had been facing outward when she shielded her eyes from the bright light. She had never before had a skin condition of this kind.