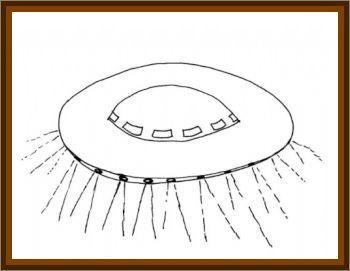 John Doe was driving back to college with his roommate, talking and listening to the radio. We were the only car on a long, flat, isolated stretch of rural highway between Paris and McKenzie, Tennessee. It was a clear, dark, starry Sunday night.

Suddenly, we saw streaks of light coming from the top of the windshield, there was no noise, we stopped the car on the road and got out, because from inside the car, we could not see the source of the light. Directly above our car was a round disk shaped object with windows. It had a raised dome cockpit in the center of the top half, with windows. It was hovering and spinning effortlessly about 200' directly above us. The object was round, silverish, and had slowly blinking green/blue lights around the perimeter. It displayed sparks of light that looked similar to holding a piece of metal to a grinding wheel. The bottom was relatively flat. It made a quiet whirring noise similar to a quieter turbine engine. If I framed the object between my left and right hands, my hands would be about 3' apart.

We watched for approximately two minutes as the object stayed right above us and our car. Suddently, the object went from standing still to a startling speed in 1 or 2 seconds. It was several miles away and made a 90° turn to the east without any loss of speed. We got back in our car to finish our journey to school. We were speechless for about 10 minutes.

That night on the 10 o'clock news, it was reported that there were identical sightings of the same object in six different states.

John Doe was asked a few questions, Here is a short transcript:

Interviewer: Can sighting be explained as any conventional man made or natural object?

John Doe: No. The closeness of the object made it very easy to see. The most startling thing was the extreme speed it reached within 1 to 2 seconds, and the 90° turn it made without any loss of velocity.

Interviewer: What is Your Background?

John Doe: I am the CEO of four companies, post-graduate education, married and the father of four children.

Interviewer: What are your views on UFOs, before and after sighting?

John Doe: Since a child, I was always interested in science fiction comic books and movies. I was always very open minded to the possibility of UFO and alien existence. After the sighting, I was even more convinced. The closeness of the experience erased any and all doubt in mind, this was definitely a UFO, and not a conventional, then or now, aircraft.