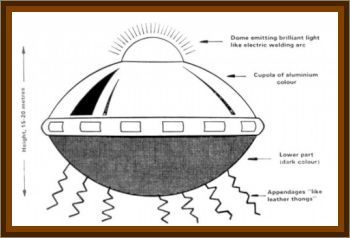 The following very interesting sighting occurred at 6:00 a.m., one day in April 1958, on the Atlantic sea board of North Eastern Brazil.

A Brazilian jeweller named Senhor Wilson Lustosa was travelling along the beach from the port of Maceio to a place called Parapueira.

At a spot called Saude, Lustosa stopped to ask some fishermen what they were looking at. They said that it was a flying saucer. He could see nothing at first, but soon he heard a humming noise, which grew rapidly louder, and perceived something which seemed to be falling out of the sky towards him, from the direction of the sea.

When the machine was at a distance of some 130' from him and the group of fishermen, and about 50' above the water, it began to rock sideways, and then stopped and hung there. It was from 55' in height, and its width was approximately that of a travelling circus.

It seemed to have three distinguishable parts:

The upper half was the color of aluminium, like an inverted bowl, and on the top of it was a small protuberance or dome, with a light as bright as that of an electric welding arc.

The lower part was also a bowl, of the same size as the top, but dark in color.

Around the widest part, where the two bowls met, was a band with a number of square portholes, from which came a reddish light.

The portholes nearest to the party of onlookers were darkened, as though there were people looking out through them.

Beneath the machine, the water seemed to be boiling, or being sucked up, but without actually touching the under part of it, and a faint humming could be heard at brief intervals. From the under part of the machine a number of things like leather thongs were hanging, motionless.

During the hour that they stood there and watched it, it rose again several times into the sky and then descended, as if crashing, with a noise to shatter the ear drums.

This seems to be a type of UFO which has been reported many times. Numerous reports of night sightings have referred to turtle shaped objects, or jellyfish shaped objects, with long golden streamers hanging down, the leather thongs?.