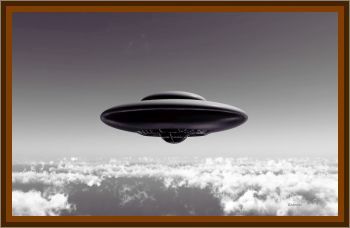 They looked around but didn’t see anything at first, and then John saw an unusual object descending in the southern part of the sky.

John described it as looking like two saucers glued together, about 15' to 20' in diameter, and silver in color. In fact, John told investigators that the surface looked like polished aluminum.

The object descended at about the speed of a man on a parachute and finally disappeared behind a hill. The hill wasn’t very far away and John decided to try for a better look, so he headed in that direction.

The whining sound had faded away when the craft went out of sight.At about 160 yards from the hill, John spotted a being, or some object standing behind a tree at the top of the hill. He watched it for only a very few seconds and started to walk faster. At that point, he tripped and to keep his footing, had to look down for an instant and when he looked up again, the being was gone.

A few minutes later, he saw a blur, heard a sound like rushing air, and saw the object ascend into the air and disappear in a couple of seconds, going straight up.

John ran to the tree where he had seen the being and, based on the size of the tree and the area where the being had shown its head and shoulders, guessed it to be approximately 3' or 3½' tall. The head had seemed to be bald, but he was too far away to observe much else. He found no footprints so he continued over the hill to see if the object had left any evidence.

In an old quarry, John found a perfectly round, burned area. It was about 15' to 20' in diameter. All the grass in the circle was charred, but at the edge, it was green. There was a definite edge to the circle and inside it, John found three indentations about 1" deep, 5" wide, and 12" long. They were about 2' from the edge of the circle. The ground in the area was very firm.

John ran back to his house and told his father. They set out for Cedar Falls where they stopped by the highway patrol office, but personnel there made fun of them and they received the same treatment when they reported the incident to the Waverley police.