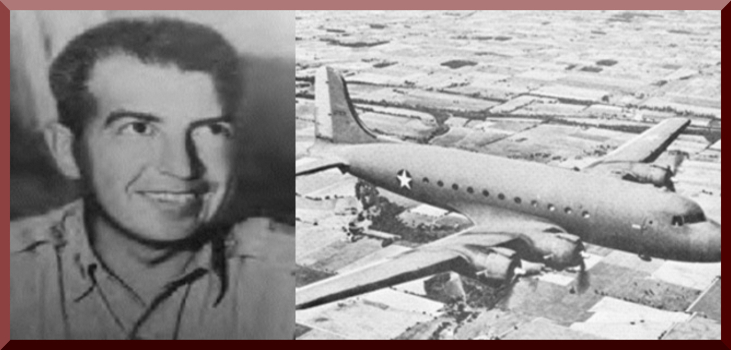 In July of 1947 Robert E. Smith was a member of the 1st Air Transport Unit, Roswell, NM. He states that:

The C-54 into which Smith helped load the single 20' crate would have been Oliver Wendell 'Pappy' Henderson's. I remember seeing T/Sgt. Harbell Elzey, T/Sgt. Edward Bretherton, and S/Sgt. William Fortner.

Capt. Oliver Wendell 'Pappy' Henderson may have been the most highly regarded pilot at Roswell AAF. A veteran of 30 missions in B-24 Liberator bombers in Europe, he participated in the postwar A-bomb tests in the Pacific and earned major commendations for his flying. Henderson kept quiet about the unsettling events of July 1947 for three decades. Finally he mentioned them to a fellow retired officer - dentist John Kromschroeder, with whom he was then involved in a joint business venture.

The dentist said nothing about this until July 1990, more than four years after Henderson's death from cancer.

The priceless scrap of material may be tucked away in Pappy's records and papers, just waiting to be freed. But there is currently no way to search the 2000+ cubic feet of materials that jam two small storage buildings and a garage to the ceilings. His widow Sappho, has rejected suggestions that investigators be allowed to search through a lifetime of her late husband's memorabilia.

The prospect is daunting, for a slim piece of metal could be hidden between any two pieces of paper in any of many scores of bulging cardboard boxes. Even if she were willing to have strangers paw through such personal matters, it could take hundreds of hours, and there is no assurance that the scrap of crashed UFO is there. It could have been lost, thrown out, or even confiscated.

In 1982, Henderson met with several members of his old bomber crew during an Air Division reunion in Nashville. According to one of the men in the group, It was in his hotel room that he told us the story of the UFO and about his part. All we were told by Pappy is that he flew the plane to Wright Field. He definitely mentioned the bodies, but I don't recall any details except that they were small and different. I was skeptical at first, but soon saw that Pappy was quite serious.

Pappy died before he could be interviewed. But his widow Sappho, agreed to be interviewed, as did his daughter Mary Sappho described what her husband had told her.

1. My name is Sappho Henderson

2. My address is: XXXXXXXX

4. My husband was Oliver Wendell Henderson, who was called 'Pappy,' because he was older than the other pilots in his squadron during World War II and had prematurely gray hair. We met during World War II, when he flew with the 446th Bomb Squadron, he flew B-24s and had 30 missions over Germany, for which he received two Distinguished Flying Crosses and the Air Medal with Four Oak Leaf Clusters.

5. After the war, he returned home and was sent to Galveston Air Force Base, then transferred to Pueblo AFB, and then sent to Roswell, later Walker AFB, where he stayed for 13 years.

6. While he was stationed at Roswell, he ran the Green Hornet Airline, which involved flying C-54s and C-47s, carrying VIPs, scientists and materials from Roswell to the Pacific during the atom bomb tests. He had to have a Top Secret clearance for this responsibility. After separating from the service, he operated a construction business in Roswell. He died on March 25, 1986.

7. In 1980 or 1981, he picked up a newspaper at a grocery store where we were living in San Diego. One article described the crash of a UFO outside Roswell, with the bodies of aliens discovered beside the craft. He pointed out the article to me and said: I want you to read this article, because it's a true story. I'm the pilot who flew the wreckage of the UFO to Dayton, Ohio. I guess now that they're putting it in the paper, I can tell you about this. I wanted to tell you for years. Pappy never discussed his work because of his security clearance.

8. He described the beings as small with large heads for their size. He said the material that their suits were made of was different than anything he had ever seen. He said they looked strange. I believe he mentioned that the bodies had been packed in dry ice to preserve them. He was not aware of the book The Roswell Incident, that had been published about this event at the time he told me this.

9. I have not been paid or given anything of value to make this statement, which is the truth to the best of my recollection.

Subscribed and sworn before me this 9th day of July, 1991 XXXXXXXXXXXXX, Notary Public In and for the County of Los Angeles State of California

1. My name is Mary Kathryn Groode

2. My address is: XXXXXXXX

3. I am employed as: XXXXXXXX

4. My father was Oliver W. Henderson. When I was growing up, he and I would often spend evenings looking at the stars. On one occasion, I asked him what he was looking for.

He said: I'm looking for flying saucers. They're real, you know.

5. In 1981, during a visit to my parents home, my father showed me a newspaper article which described the crash of a UFO and the recovery of alien bodies outside Roswell, New Mexico. He told me that he saw the crashed craft and the alien bodies described in the article, and that he had flown the wreckage to Ohio. He described the alien beings as small and pale, with slanted eyes and large heads. He said they were humanoid looking, but different from us. I think he said there were three bodies.

6. He said the matter had been top secret and that he was not supposed to discuss it with anyone, but that he felt it was all right to tell me because it was in the newspaper.

7. I have not been paid or given anything of value to make this statement, which is the truth to the best of my recollection.

1. My name is John Kromschroeder, DDS.

2. My address is: XXXXXXX

3. I am retired from the field of dentistry.

4. I met Oliver W. 'Pappy' Henderson in 1962 or 1963. I learned that we shared an interest in metallurgy. We participated in several joint business ventures.

5. In 1977, which was the 30th anniversary of Roswell event, Henderson told me about the Roswell incident. He said he transported wreckage and alien bodies to Wright Field in Dayton, Ohio. He described the wreckage as spacecraft garbage. He said the passengers suffered their death. He described the beings as small.

6) Approximately one year later, Henderson produced a piece of metal taken from the craft. I gave it a good thorough looking at and decided that it was an alloy that we are not familiar with. It was a gray lustrous metal resembling aluminum, but lighter in weight and much stiffer.

7. I have not been paid or given anything of value to make this statement, which is the truth to the best of my recollection.

Another person who heard Henderson's story was Lt. Vere McCarthy, who had been a member of Henderson’s old WWII flight crew. McCarthy reported that Henderson told the story during a reunion in 1982. In a letter he wrote:

He told us the story of the UFO and about his part. All we were told by Pappy is that he flew the plane to Wright Field. He definitely mentioned the bodies, but I don’t remember any of the details except that they were small and different…Pappy was quite serious.

In a phone interview with Leonard Stringfield, McCarthy said:

Pappy told his story but didn’t go into much detail.

It is also interesting that his wife, Sappho Henderson, remembers him saying the bodies were packed in dry ice.

Part of Roswell mortician Glenn Dennis' independent testimony, about when he got calls from the base concerning preservation techniques for small bodies that would preserve the integrity of body fluids, was suggesting they pack them in dry ice.

Debunker Karl Pflock used a slightly different tactic, claiming that Henderson was nothing but a practical joker, and was just having fun with people, including his own supposedly unwitting wife and daughter.

One would think Henderson's wife and daughter would be slightly better judges of Henderson than Karl Pflock, who never knew the man.