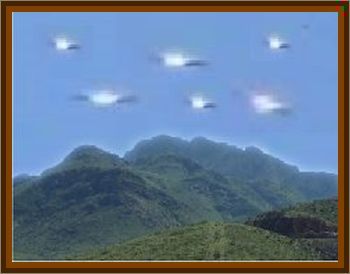 My name is Georg N. Pantoulas, and I want to tell you the story of the UFO crash near the village of Megas Platanos in Central Greece on September 2, 1990.

I went there to interview the witnesses and this is what they told me.

About 3:00 a.m., shepherds and some villagers observed a small group of 5 to 6 UFOs approaching the area from the North. One of them had an unstable flight and seemed to be with a problem.

Strange lights came out of UFOs fuselage, but without any noise. As an eyewitness, shepherd Trantos Karatranjos told me, suddenly the troubled UFO lost altitude and crashed to the ground at a distance of about 500 metres away from him. He didn't hear any noise but a fire started burning the bushes.

Trantos Karatranjos was very afraid to get closer and stayed in his position watching the phenomenon. The rest of the UFOs in this group stopped over the accident spot and 2 of them landed near the destroyed UFO. In a few minutes the fire in the bushes was terminated. For the rest of the night, till dawn, there was an unusual traffic from the ground to the flying UFOs. Light spots went up and down, probably collecting the pieces of the destroyed UFO and the bodies of the crew. They finished the collection before sunrise and after that the rest of UFOs took off and were lost in the sky. Meanwhile all the villagers had been awakened and had seen the whole operation.

Early in the morning the villagers went out to the spot where all of this occurred and they saw on the ground a burned oval shape in the ground with a cut pine tree in the center, it is still in this place, and very small metallic pieces and pieces of wires around the tree.

Some of the people, like Argyris Alevantas, collected a number of these pieces. One strange thing was that at the edges of the burned oval the fire stopped like it had been cut by knife!

Some hours later a team of Hellenic Air Force personnel came in the area and told the villagers that this was nothing serious, maybe a Soviet satellite crashed or a plane! They took some pieces of the UFO too and left the area.

Argyris Alevantas sent a piece of the UFO to the Space Research Institute in Brussels. That's the story. If you think that we need more information we can get more because I have a very good relationship with the people in the village of Megas Platanos. You see, they don't like to talk a lot about this story because they are afraid that someone will think they are crazy or something!