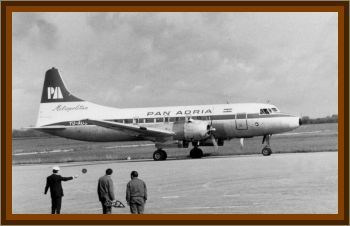 At 1:40 a.m., the Fokker 227/Fairchild 27 from Pan Adria took off for a routine flight starting from Zagreb en route Belgrade and Podgorica, then Titograd.

The plane was carrying 56 passengers, goods and mail. After Zagreb the plane flew over Sremska Mitrovica where it encountered a bright red UFO. Which was so bright they couldn’t see what was in it, but the UFO flanked the plane all the way to their landing in Belgrade airport Surcin, today called Nikola Tesla Airport. According to the pilots the UFO stayed at 300m after they landed and was not moving at all in the sky.

The first two went to the control tower after landing to see what they had to say, while Stanko took care of the plane and loaded the goods into it. Inside the air tower there were both civilian and military personnel. Among them was Zlatko Vereš who was the chief of Yugoslav air traffic control. He had been urgently sent to the airport to evaluate the situation. Now this tells us the UFO was observed my many people including the passengers.

The radar erases object that stand still after five turns, like mountains and other static objects that would clutter the radar screen. Apparently the UFO had vanished from the radar yet was still in the air, just as it had been when the plane landed. So according to Zlatko Vereš they observed the UFO from the balcony. It appeared as white then and sort lingered static in a light cloud.

The military informed that they were ready to send up fighters if anything would happen. The Pan Adria pilots were told to keep what they saw to themselves and were assured that they would be escorted by fighters to their Podgorica flight. Shortly after the two F-86 took off and passed the UFO whereby the radio communication between them and the air traffic control failed.

The pilots then began their flight with the Pan Adria Fokker 227 on the way to Podgorica.

The UFO catches up to their speed and follows them on their left side. The ground control orders a routine left turn but that causes a stir in the cockpit since they fly straight in the path towards the UFO. A spontaneous gathering in the cockpit of personnel and passengers causes a light panic.

Immediately after that the ground control orders a full 180° turnaround to avoid a fatal outcome.

The UFO then increases its speed to Mach 7, according to radar control, and heads north to the airport of Batajnica.

At this point two to four MIG-21's takeoff to catch up with the UFO while the Pan Adria flight continues to Podgorica.

The day after there is one dead pilot and neither the names or direct sources to the casualties from the MIG-21 chase has been made public.

But probably the eventual incidents took place near the Yugoslav/Hungary border.

The military later said it was a weather balloon. Also on the day after Dobroslav Džeba went to the air traffic control where another personal met him and he was told strait out that to never speak of this again if he wished the well being of his family to continue.

At 9:00 a.m. on the day of the incident Josip Broz Tito flew to Moscow. On a tour to visit the Soviet Union, North Korea and China.