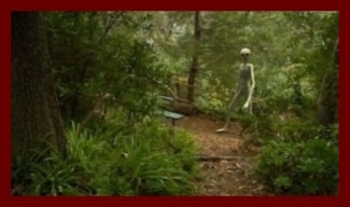 The female witness awoke to the sounds of her 5 month old baby crying.

It seems that a strange light originating from somewhere outside had disturbed the child’s sleep.

But feeling extremely tired the witness goes back to bed, but she awakes almost immediately and observes a beam of light entering the room through an opening in the blinds. The light does not behave like a normal ray of light, but advances along the walls and objects in the room like a ribbon of coherent light.

Concerned, the witness thought to herself, I don’t want the light to touch my baby and immediately after the lights retracts out the window. The witness then attempts to sleep again but is awakened again as she feels a presence. She looks at the walls and sees the same strange light which immediately retracts again.

She attempts to sleep again but opens her eyes and sees the light shining on the baby’s cradle, the light retracts again and she places the baby on the bed.

She then looks out the kitchen window to see where the light originated from. She then hears a soft whistling sound and sees a very intense source of light in the garden close to the villa. She also sees several men running towards the source of light and wonders what are these fellows doing here. She then walks to the living room where she has a better view of the area. She then observes in the garden approximately 60' away a very beautiful machine about 4½' in diameter hovering at about 3' from the ground. The apparatus has an unknown metallic glare, like milky money with an intrinsic luminosity. The luminous beam of light that she observed earlier is coming out from the side of the object, the beam is colorless or light gray in color.

The object is totally silent and is not moving. She then observes a strange character clearly illuminated by the glare of light, the figure is humanoid about 4' in height, with a large head, without visible neck.

She finds his appearance extremely disconcerting and thinks it might be a soldier. The figure is wearing a type of overall with 3 large pockets one on the top and one on each leg, its also wearing a belt. She stares at the being intently, afraid of being discovered. Again she hears the whistle, which had ceased and then sees another similar being which appears to be collecting stones from the ground. Moments later it raises its head and sees the witness who realizes that the beings are not human.

A terrible fear then invades her and the hairs of her body stand up on end. She is so frightened that she is unable to move. She observes the figures intently and does not get the impression of hostility coming from them. At this point the first figure joins the second one and they appear to engage in conversation, 3 or 4 others which she had seen at the beginning now join this two. One of the beings, apparently the leader makes a hand sign and the figures scatter aga in, some climbing over a nearby palisade. Only one creature remains behind, this one engrossed in collecting stones from the ground.

The witness remains paralyzed at the window. After what seems to be a long time the other beings return. She notices that they seemed to proceed with discipline and confidence. Moments later a transparent telescopic foot comes down from the center of the object, then squatting, and one by one, the beings place themselves inside the foot and levitate up into the object. They seemed to be absorbed into the center of the object, at this moment the luminous beam of light on the side of the craft disappears.

The witness was convinced that there were 6 of these beings and was confused as to how all of them managed to fit inside such a small object. The object then rose slightly and began to rotate at high speed in a clockwise direction. Its luminosity increased but without illuminating its surroundings. It then rose in a parabolic trajectory until approximately 75' from the ground and then faded out.

The witness remained at the window for a few moments and then went to the kitchen to look at the time. 45 minutes had passed. The witness further added that the beings had moved in a quick stealthy manner like a cat. The next day she discovered a pink spot under her right eye of approximately 1" in diameter, she also saw a similar but paler spot behind the right ear of her son. Both spots disappeared completely as the months passed.