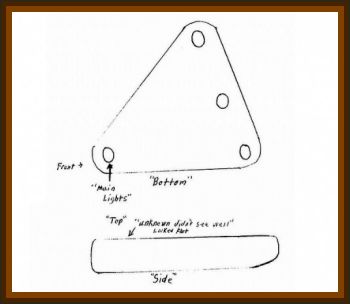 I was going home on foot toward the North side of the city at 4:55 a.m., it was A cool clear night.

When I looked up to my right and seen 4 large bright white lights. Since there is no tall buildings or towers in that area they stood out and the fact that they were in the shape of a triangle.

As I got closer I could see the outline of the craft that was shaped like a thick triangle was rounded off edges, under it was 4 large white lights. One on the front, one on each corner and one in the back that lined up with the light on the front edge.

It was A flat black color like stealth aircraft have. It was not A helicopter and it did not have the pop and click of A main rotor or the shape of A helicopter. It had no navigation lights of green or red. It made no noise until I got closer I heard A very low rumble that seemed to be behind and higher up then the aircraft.

As the craft moved I heard no noise. It headed southwest low at A slow speed.