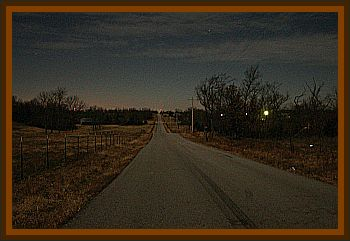 The small community just 15 minutes outside of Greenville touts a ghost story nearly 100 years in the making.

It's called the Legend of the Pactolus Lights. Ghost hunters and those wanting a scare venture out to what used to be a railroad at night and see mysterious flashes of lights.

There are many variations of the tale, but one says an East Carolina University, ECU, student rode his horse to the railroad stop in Pactolus to meet his girlfriend, and never returned.

He's waiting around and it's late and there's three people walking along the tracks that see his horse and they want his horse, says Professor Jim Kirkland at ECU. So they murder the student.

The family feared the worse after the horse returned without his rider. They searched the train station and the surrounding area only to find nothing.

And, allegedly, now that student's ghost walks up and down the tracks, shining a bright light.

Some people say the light is waist level like he's walking alongside his horse and others say it's above the head like so he's on the horse, says Prof. Kirkland.

Kirkland says there are many possible explanations for the lights.

A lot of people will say I'm not sure it's supernatural I just think it's unusual light phenomena, it's the climate or the fog or maybe it's refracted headlights and you'll encounter different explanations, he said.

The tracks have long been removed and all that remains now is a path. The land is now privately owned. Those who go to the area are promptly chased away. This proves the point to always get permission first and limit your party time to private places.