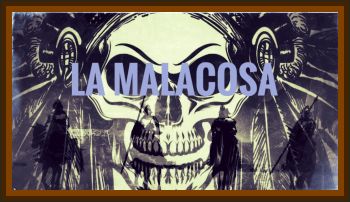 In the 1530s and 1940s, the Spaniard Cabeza de Vaca and his Conquistadores followed the Mississippi River and came in contact with various Native American tribes of varying dispositions.

Upon befriending the Avavares further westward they were told a most unusual tale.

According to the Indians, approximately 16 years earlier the region had been visited by another bearded character of unusual aspect. This fellow was called by the Indians Malacosa or Mr. Bad Thing, according to the Spaniards, an accurate appellation given his proclivities. Even though bearded his facial features were never seen clearly or where otherwise indistinct or else clouded by a mist.

This character invaded Indian homes by night, accompanied by a light and an electrical sensation that would make the hair of the inhabitants stand on end.

Apparently paralyzed, the poor tribes people would stand helpless as, armed with a blazing brand or wand the bearded creature would rush inside and perform intrusive surgeries upon its victims. This included abdominal intrusions and taking of intestinal samples, to incisions or perhaps partial amputation of arms and legs, which would then be surgically stitched or otherwise, repaired.

The androgynous ambiguity of this creature was not lost on the Indians, for it happened that during this season of visitation, Malacosa would appear in the midst of their celebrations, dressed alternately as an Indian man or woman, which raises the question:

Was he in a possible quest for genetic material based on seduction?

The Indians offered him food but he never ate, they inquired as to his place of origin, and Malacosa pointed to a nearby hole on the ground and told them that his home was there, in the regions below.

At first the Spaniards laughed at the account of the barbarian bogey man until the Indians brought forward numerous people who still bore the visible scars of the intrusive or amputation reattachment surgeries.