Object Splits In Two, Then Three 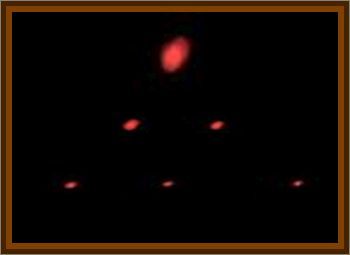 M.E. Marshall saw a light, like a satellite, split into 2 parts, one of which was copperish color, then 2 more joined up. One object may have been tumbling.

Mr. Marlin Marshall, his 12 year old son & his 9 year old daughter, observed a shiny object directly overhead. The object appeared to be at a great height.

Then the bright object appeared to split and became 2 objects. Shortly afterward the shiny object gave off three other shiny but smaller objects. Another object was seen which appeared to be much higher making 6 objects in all. All the objects eventually faded from view. The objects were viewed through 6x30 binoculars.