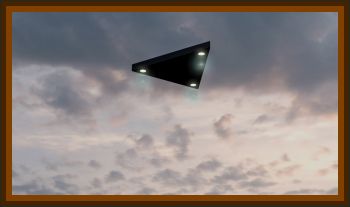 We live in a single family house on a hillside over looking the valley where Reisterstown Rd. runs from East to West.

We are on the South side of Reisterstown Rd., 21 Old Tollgate Rd.

I was laying on our trampoline looking up at the stars and I noticed that some of them were disappearing almost directly above me. There was a very faint V shape that I could see moving slowly from South to North.

As I looked harder at it, and it began to move directly over the valley, it was below a very slight cloud layer that was at most 1,000'. I guess that because it was reflecting some light from the valley.

When the object came between the cloud layer and myself you could see that it was pretty much perfectly triangular, almost equilateral.

It was black with the exception of a very slight gray V shape along the bottom. There were no lights whatsoever on it. Nothing at the points of the triangle, no collision strobes.

It looked a good bit like a stealth fighter from directly below, but I could not see the serrated rear edge. I have seen both stealth aircraft up close on the ground and doing daylight flybys at around 300' to 600', and it did look a bit like one.

There was no sound whatsoever. There was no masking noise in the area to disrupt any sound coming off of it, and it appeared to be no more that 400' away when I first noticed it.

No exhaust, no apparent heat trail, nothing.

It was moving very slowly, so although it was very low, I had a pretty good, long look at it. It maintained altitude and heading and went straight North. I got off of the trampoline so that the pine tree in the back would not block my view and could see a fairly low angle view from the rear.

When it got to a certain point, perhaps a ½ mile away it seemed to just disappear, although as flat as it seemed, just the angle would have made it even harder to see.

It was definitely solid, and so black that it was extremely hard to see, even as close as it was. If I had not been looking directly at the stars it passed in front of I would never have noticed it. The thing that scared me about it was the fact that a thousand of those could go over this neighborhood every night and no one would even notice them.

I am very familiar with all known civilian aircraft, and all known military aircraft in the current inventory. I work for Lockheed Martin and I have had that interest since childhood. The absolute total silence of it was spooky, along with the slow airspeed.

About 20 minutes prior to seeing it, a helicopter had made a complete transit of the area at a slightly higher altitude, which was interesting.

I lived about ½ a mile from the Garrison county police unit and the county copter would at least pass by there if not land very frequently. Generally, the county copter goes over this area every night at around 11:00 p.m. or so. I could not see the colors on it, but it sounded like the usual, but not like the Jet Rangers that the state police fly.

What made it notable was the slow racetrack it ran over the area, but with no spotlight to the ground as if it was looking for something. I don’t know if that was related at all.

I would love to know if anyone else in the area saw this. Had it been higher and faster I might have thought it was a stealth fighter or something, but at the distance I saw it, moving as slowly and silently as it was, I don’t think it was anything military.

Also, without any markers it was flying right in the BWI northwest landing pattern, and there were planes fairly well stacked in bound in the area into which it was directly headed.