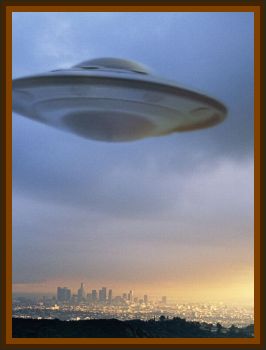 I did have a minor experience last winter, sometime after the first of the year, that you might find interesting.

Again, I was walking the dog at about the same time of evening, but being winter it was long past dark. I noticed quite a bit of air traffic and remember thinking it must be Air Guard weekend.

As I said, they have maneuvers above the open crop land of this area once a month.

About 8:00 p.m. I took the dog out one more time before settling in for the evening. I heard a very loud twin turbo prop coming overhead.

I assumed he was either landing or taking off from the airport. However, when I looked up he appeared to be in level flight. Then I realized he was escorting some object. I say escorting because he was flying behind and to one side, like a wingman, and turned as the object ahead of him turned, but slightly later.

Not a coordinated formational turn. I would guesstimate they were at about 2000', separated by about 1500'. They passed directly overhead. The twin turboprop whose sound originally attracted my attention was overly lit with strobes and NAV lights. When I say overly, I mean more than required by FAA regulations.

The interesting part was the craft being followed/escorted. It was totally silent, no prop or rotor sounds whatsoever. I almost missed it, but caught it out of the corner of my eye as I searched for the turbo prop which came out from behind some trees across the street.

The lead object was almost completely black against the black night sky so I couldn’t determine a shape. There were only 2 lights, like landing lights, maybe 20' apart, illuminating something toward their center.

What I could imagine, but not see, were lights close in on either wing illuminating sides of a fuselage forward of the wings. I did not see the wings or cockpit, just imagined them as I grasped for an explanation of the object.

Obviously the silence and lack of lighting stunned me. As I said I’m a private pilot and anyone flying or escorting a private plane with no FAA lights, forgetting the lack of sound for a moment at night, in a direction away from an airport, would lose their pilots license quicker than they could say altimeter. I still don’t know what I saw that night.

I’ll keep searching the sky as I walk the dog.