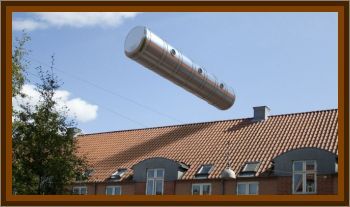 I was walking across a street when a bright light caught the corner of my eye. I looked up just as an object disappeared beyond a nearby building. I only saw the very end of the object, but it was flat sided, looked like polished aluminum, and had what I assumed were rivets or other attachment points.

The sky was clear with no wind. There was no noise, the object was angled slightly downward at about 200' altitude, and I assumed I had seen the tail end of a B-25 because, during the war, local pilots would sometimes fly low over their homes if they happened to be in the area. The next morning, our newspaper had a front page article, below the fold, concerning a military aircraft that appeared to be about to crash because its engine had stopped.

Dozens of people along the Ohio river from near Louisville down to Owensboro had called law enforcement offices to report the impending crash landing. It was interesting that none of the observers had reported whether the craft was single engined, or multi engined, nor whether it was low wing, mid wing or high wing. This caused me to reflect on what little I had seen, there had been no tail markings or hinge line, as it would have had if I had really seen the tail of a B-25.

At the time, I was a builder of model airplanes and our family subscribed to two model magazines plus Flying Magazine, therefore, had I seen the entire object, I would have been able to identify what aircraft I had seen. No one used the terms UFO or flying saucer, because this predated Roswell by three or four years. The partial object I had seen was flat sided with upper and lower corners that were slightly rounded, much as was the case of the vertical stabilizers and rudders on a B-25.