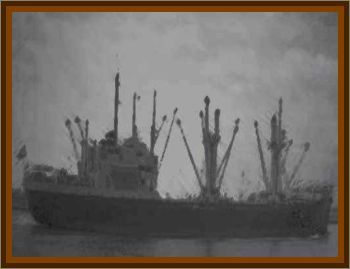 In February 1948, distress calls were picked up by numerous ships near Indonesia from the Dutch freighter S.S. Ourang Medan. The chilling message was:

All officers, including captain are dead lying in chartroom and bridge. Possibly whole crew dead.

This message was followed by indecipherable Morse code then one final grisly message: I die.

When the first rescue vessel, American merchant ship, the Silver Star, arrived on the scene a few hours later, they tried to hail the Ourang Medan but there was no response to their hand and whistle signals. A boarding party was sent to the ship and what they found was a frightening sight that has made the Ourang Medan one of the strangest and scariest ghost ship stories of all time.

All the crew and officers of the Ourang Medan were dead, their eyes open, faces looking towards the sun, arms outstretched and a look of terror on their faces. Even the ship's dog was dead, found snarling at some unseen enemy. When nearing the bodies in the boiler room, the rescue crew felt a chill though the temperature was near 110°F.

The decision to tow the Ourang Medan for salvage was quickly taken. It was only when the ships were tethered together that smoke was discovered below decks, specifically the No. 4 cargo hold. Within seconds of the tow rope being severed, the Ourang Medan exploded with enough force to lift it out of the water before sinking to the sea bed.

To this day, the exact fate of the Ourang Medan and her crew remain a mystery. Some say that pirates killed the crew and sabotaged the ship, others claim that she was transporting an illicit cargo of chemicals such as potassium cyanide and nitroglycerine, both of which become dangerous when combined with sea water.

The condition of the bodies found aboard and haunting distress call, has led to more rampant speculation involving aliens, conspiracies, and even ghosts.