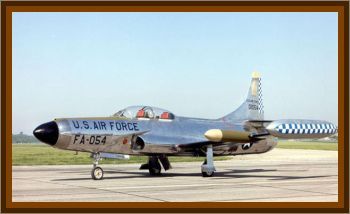 Pilot Captain Suggs, along with his radar operator Robert Markhoff, were flying an intercept mission with a F-94C Starfire of a UFO that was seen over the alert area at Otis AFB. The plane successfully took off and was at 1500' when suddenly the engine, along with all electrical systems, quit and the plane began falling towards the ground.

Frantic, Suggs cut the nose to keep the aircraft from stalling. The plane was too close to the ground to accomplish an air start so he ordered Markhoff to bail out. The canopy was then jettisoned and Suggs heard an explosion as Markhoff ejected. Suggs immediately followed suit and the plane continued on its course. Suggs landed safely, but the most peculiar thing happened. There was no sound of a jet explosion. There wasn't even any sign of Robert Markhoff. Between the time when Suggs bailed out and he hit the ground, the aircraft had simply vanished. The only thing ever proving the existence of there being a plane ever in the air besides Captain Suggs was the canopy of the cockpit.