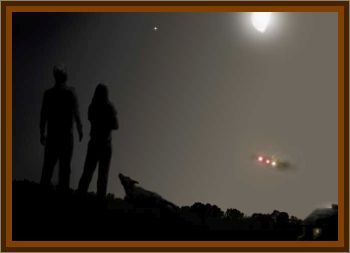 Miss E.D. Bonacini, was returning home with her boyfriend when both of them observed a rectangular red light in the sky. Looking at it again quickly, they saw that the light had changed its shape, becoming a kind of upside down parachute that was moving toward them. After 90 seconds, it was very close, nearly overhead, hovering at a height comparable with that of a 3 or 4 story building.

The object resembled a half sphere with a small protuberance in its lower section and a very bright area midsection, fading away toward its outer perimeter. The object was as wide as the road, 60' in width. The couple watched from a hidden position for about nine minutes. They had the feeling that somebody was observing them from inside of the object.

They decided to run away. As they an, they object tilted 45°, attaining a vertical orientation and departing quickly in the direction of Fiumicino. The craft slowed down after some miles and became lost from view following another 90 seconds or so. As it departed, the object displayed all the colors of the rainbow.