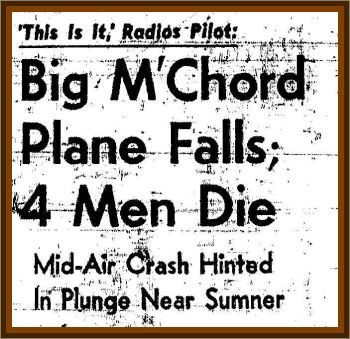 A military C-118 cargo plane collided with what was described by witnesses as a UFO, burst into flames and crashed near Orting, Washington, southeast of Seattle. All four crew members were killed. The plane was on a routine training mission and had taken off from McChord AFB, near Tacoma, Washington, at about 6:30 p.m. The plane had been in flight about 90 minutes when the collision and crash occurred. An article regarding the incident appeared on the front page of the Seattle Post-Intelligencer on April 2, 1959. An article about the crash also appeared in The Seattle Times on April 2, 1959. In The Seattle Times article a subheadline said:

Bob Gribble ( founder of the National UFO Reporting Center ) investigated the case. When he attempted to reach the site of the crash he was kept out by law enforcement and military personnel. He interviewed 2 witnesses who saw a brilliantly glowing UFO moving rapidly northward near the area where the aircraft was moving. The original investigation in 1959 concluded that the aircraft was flying south and the UFO that witnesses saw was moving north, at approximately 8:30 p.m. One of the newspaper articles said that the aircraft crashed at around 8:15 p.m. The aircraft crashed a few miles to the north of Orting, Washington. This incident is also briefly described in a book by journalist Terry Hansen titled: The Missing Times. According to Hansen right before the crash the pilot radioed that:

We've hit something or it's hit us!

Just before the plane's flaming wreckage crashed to the ground.

After review of the accident report prepared by the Air Force, the newspaper articles, and witness testimony I concur with the Air Force explanation that the aircraft crashed as a result of an engine fire that occurred during execution of a sharp right turn. The aircraft collided with trees with the right hand wing resulting in the number four engine catching fire. Ultimately the right wing was destroyed resulting in the pilot losing control of the aircraft which crashed to the north of Orting, Washington.

The witnesses near Tenino, Washington who saw a streak of light moving rapidly northward over the treetops, to the East of their position were actually witnessing the aircraft on fire and about to crash. Prior to the new information that I received from the Air Force the assumption was made that this northward moving light collided with the aircraft that was moving southward. The witnesses thought that this bright light was a UFO. The Air Force concluded that cause of this crash was pilot error and flight controller error.

An interview with a nephew of the pilot of the aircraft related that the family believed the Air Force explanation of the crash that the aircraft crashed as the result of collision of one of the wings with a tree. The nephew did say that the family was aware of the UFO collision rumor, right after the crash and that the rumor persisted through the years. And was not sure where the family found this information. As the UFO collision possibility was not in any local newspapers.