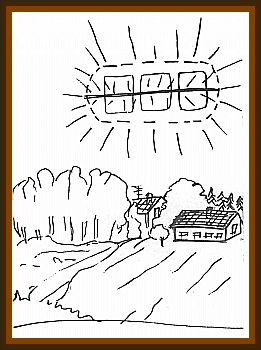 A woman driver who prefers to remain anonymous was driving home to Orsundsbro from Uppsala on route 55.

After one mile, she saw 2 police cars blinking bluish lights, or so she thought. The lights were some 300' away on the road. She thought they were searching for something.

Later, near Sava, she saw a bright light in the air. At first, she thought it was a police helicopter helping the police cars in their search. She felt very uncomfortable in the situation, but continued to observe and drive her original course. Soon she found the object in the air appeared larger than an ordinary helicopter.

It had 3 lighted windows and a blindingly strong white light. She stopped the car on a viaduct and got out to have a better look at the mysterious object. The light was now weaker and the object appeared white and cigar shaped. It had been 7 to 8 minutes since she first saw the object.

She had never had any knowledge of UFOs and has no explanation for what the object may have been.

The whole affair made her very frightened. At home, she drew a sketch of the UFO.

The object was grey on the underside and was not any kind of ordinary aircraft.