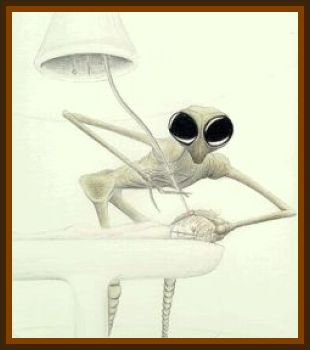 10 year old Roger S woke up and saw 4 entities about 5’6” tall, standing by the bed. They put Roger on a table like device that had no legs or supports.

The table was white, glass like and about 2’ wide and 6’ long.

The entities put Roger on the table and then floated him over to the bedroom window. They opened the window, and floated the bed along the side of the apartment to a small open field. They then approached a craft that was shaped like 2 plates one inverted over the other. A door opened up on the side of the craft.

His next memory was of standing next to a black glass table with buttons on it. The entities had heart shaped heads with 2 giant black eyes, 2 holes for a nose, a slit for a mouth and were gold in color.

They spoke to the witness apparently through telepathy.

The entities asked Roger what he was, and he replied that he was a human boy. They then took him into another room and showed him a film of his friend Nancy in a hospital. He asked where Nancy was, and they told him that she was on another ship and she will not be reborn because she had been born too many times.

He was also shown images of past events and given information on future events. A small floating device approached Roger and apparently took a small skin sample from a sore on one of his fingers.

He was then taken to another table where a man was sitting up. He was about 30 years old with blond hair and a mustache. Roger was then directed to another panel where they told him to push the buttons. Soon the smaller object apparently entered a larger craft. It was white inside the larger ship.

They removed his nightclothes and gave him a red suit that clung to him. The suit had some writing on it resembling hieroglyphics. He was then taken into another room and was told by the entities that they could make themselves any shape they wanted. They also showed him a map on the wall that was apparently of America.

Soon he was told that he was going to be returned. They left and went into another room that was square and had buttons located in the walls. This room also had a screen on which they showed Roger in bed at home, as his father came into the room to check on him.

He was then taken into another room that was described as round or circular in shape. In the middle of the room there was an object that looked like a large clear glass box with 2 buttons on the side. The entities opened a door on the box and had Roger step into it. Then closed the door behind him.

The entities went to a computer like device and started pushing buttons. At that time a flat, square, red laser type light went down over his head to his shoulders and back up again. He was told that they were taking a brain scan.

Soon he went into another room that was all black. Apparently in this room they projected a 3D imager or Roger skiing down a slope when he was older. After another preview of future events, Roger was taken into a round room. In this room there were some entities that were different.

They looked like the others, but their skin appeared orange. Their eyes were blurry black, and they had only 3 fingers.

He asked about them and was told that these were women. Also in this room there was a very large entity that Roger said he only came up to the middle of his thighs. He looked like the others except he was wearing a robe with writing on it.

Another entity with blue tight fitting clothing that was about Roger’s height and very muscular was also present. There was another alien somewhat smaller than the larger one and wearing a black cape and a helmet.

All 3 left the room while Roger was still there. After some questioning about reproduction, he was taken into another very large room. This room had a lot of glass cages with different animals in them. Some of the animals were normal Earth animals, but others were bizarre mixtures of different animals.

Soon Roger was taken into the smaller craft, which then left the large craft and flew back to Earth. The aliens took him back into his house through the front door and led him into his room. All during the encounter Roger was followed by a small red sphere or probe.

In one of the rooms he was shown a screen, in which he saw humans wearing uniforms with NASA emblems that were apparently experimenting on some aliens laying on cots or beds.