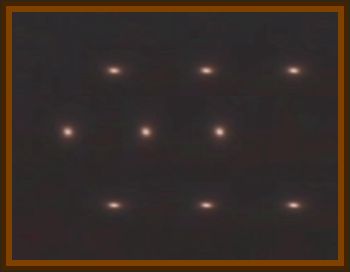 Orbs in diagonal line like 7 of them and 5 in a triangular form started moving all over making different shapes and eventually disappeared.

i had just pulled up to my boyfriends house and looked up to the night sky as I usually do because I love stars.

I noticed something that looked like a a star formation, but I eventually realized it was moving.

I called my boyfriend to come outside as soon as I realized this, and eventually everyone from inside the house came outside to witness the crazy objects in the sky.

My feelings were pure amazement but my boyfriend started to get freaked out. The objects continued moving across the sky in different patterns until they were no longer visible. I also tried to capture this on my phone but nothing showed up but the night sky.

After, I felt very confused but still amazed at what I saw.